Tahrir and The ‘Liberation’ of Arabic Literature 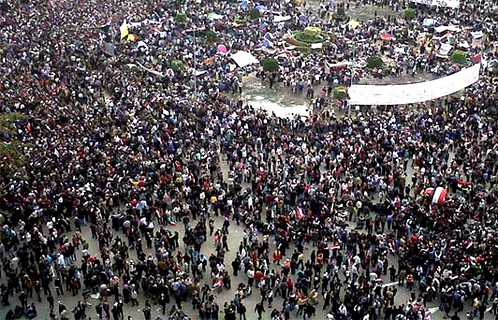 In the U.K.’s Independent, Boyd Tonkin has an exuberant look at Egypt’s publishing future, declaiming, “Now all is changed—changed utterly.”

Certainly he’s not the only exuberant one—who can look at events in Tahrir and not enthuse? — but perhaps declaring the “utter” liberation of Arabic literature is premature; perhaps no literature, anywhere, can really be liberated from social censors and taboos.

“We had a psychological barrier – what I call ‘the policeman inside us’. That policeman was killed” on Tahrir Square. The mental hurdle that inhibited free expression “has been totally destroyed for all of us – whether in Jordan, Yemen, Saudi Arabia or Egypt”.

Surely, there is a new feeling of freedom: A group of Egyptian writers at the Casablanca Book Fair in Morocco made a similar announcement, according to Youm7, and Meedan is curating a whole section titled “Has Egypt’s uprising liberated Arab literature?” There are certainly many reasons to believe in a brighter future for Egypt’s writers and readers.

But Egyptian novelist Khaled al-Berry, shortlisted for this year’s International Prize for Arabic Fiction—while also exuberant, of course—gave us a harder look at future challenges and possibilities.

We have different forms of censorship in Egypt: political, religious, and moral. The past regime always said that it didn’t ban books. It could be right. The problem was that they didn’t let you make valid books. They blocked the access to ‘real’ information and let people produce books that made them look silly and trivial. … Hence, they made books and reading itself something that one wouldn’t be proud of. People of means became far prouder of having the latest mobile phone than of having the latest book.

Al-Berry went on to talk about his personal experience with censorship, not at the hands of the government, but at the print workshop:

The above means that even in absence of direct political censorship there are both religious and moral censorship. The politicians rested and relaxed and left the new forces doing their works. In 2004, I was overseeing the printing of my novel Negative, a novel that includes some sort of  masochist relationship between a dreamer of the sixties who still loved the regime that imprisoned him and a wife who fell for a younger man who abandoned both dreams and ‘big patriotic causes’ and who was extremely individualistic. For me, this was a testimony of my generation.

Well, a worker in the print workshop who obviously had not read the book read one passage that contained ‘obscene’ sex scene. He insisted on stopping the whole thing midway. I tried to convince him to go on but he was adamant. We agreed in the end that we’d go to the owner of the print workshop, a middle aged man who smoking hashish in shisha. After the worker explained the case, I was subject to a moral lesson from the owner. ‘Do you agree that your sister could read this?’ he asked. Yes, I said. And he told me that “every household has its moral standard.”

This prompted me to end the conversation and ask him to give me his last word because if he wasn’t going to do it I’d take the novel away and wouldn’t pay him. My publisher advised me in private to pay the worker a bribe. And that’s how the whole dilemma ended. The guardian of morals took 20 pounds and the novel was published. (The publisher himself, who’s proved to be daring in publishing political books, kept this novel at very low profile so that it didn’t cause problems with the public).

Al-Berry told Tonkin that a cultural revival needs to include not just highbrow literature, but good children’s books, crime writing, and romance. “I hope to see these and other genres coming back so that everybody finds a book that suits their taste.”

He added these hopes to ArabLit:

I’m looking forward to a more transparent society that allows access to information and paves the way to the production of ‘more valid’ books…. But the big task is the change of attitude socially. This needs time. It needs civil organisations to work in order to make book commodity worth being proud of and worth defending. In absence of a regime that monopolise ‘public services,’ I hope we will have a sector of business people who care to build public libraries and to support publishing. That’s a real struggle.

The good thing is, there is something deep in the Egyptian culture that values reading and writing—we need to unearth it. I really rely more on the kids and younger generations; they will be the real drive behind prospect of change.