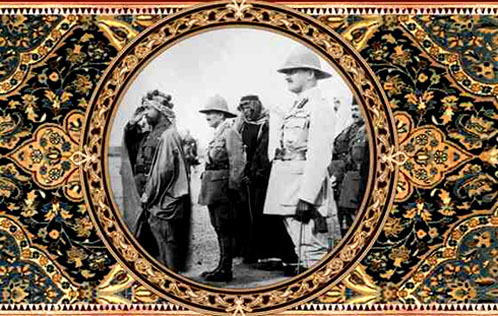 In my last post I wrote somewhat unflatteringly about one New York Times luminary, Nick Kristoff. In this one I write in praise of another, Karl E Meyer.

In 2008 Meyer and his co-author Shareen Blair Brysac wrote Kingmakers – The Invention of the Modern Middle East. I’ve only just got round to reading it, and it’s a treat.

Over twelve chapters Meyer and Brysac provide short biographies of Britons and Americans who have shaped the Middle East over the past century and a half – as imperial proconsuls, agents provocateurs, spies and politicians.

The biographies are weaved into a common thread of commercial and political interest, of interference, manipulation and as the title suggests, king making. The first few characters in the book are agents of the British Empire who sought to secure British influence in the Middle East as a bulwark against the Empire’s rival European powers – France Germany and Russia – and to protect the passage between Britain and the jewel of its empire, India: Lord Cromer, Lord and Lady Lugard, Mark Sykes, Arnold Wilson, TE Lawrence and Gertrude Bell, Edmund Ironside and the three Sir Percies – Cox, Loraine and Sykes.

As Britain’s influence wanes and America’s waxes, others play a key role in the shifting balance of power. Harry St John Philby, Glubb Pasha and finally a trio of Americans, Kermit Roosevelt, Miles Copeland and the only protagonist still living, Paul Wolfowitz.

Together these characters had a profound effect on the key nations of today’s Middle East – Egypt, Saudi Arabia, Syria, Iraq, Jordan, Israel and Iran.

In a way, I’m glad I waited until now to read Kingmakers. In the year of the Arab Spring, Meyer and Brysac’s account of the personalities they describe remind one of some of the lesser-known history of the Middle East. For example, the use of bombing as an economic means of bringing the Iraqi tribes to heel in the aftermath of World War I and the dissolution of the Ottoman Empire. And the coup devised by the British and executed by the US Central Intelligence Agency that deposed the Iranian Prime Minister Mohammed Mossadeq following his nationalisation of the Anglo-Iranian Oil Company.

Here, for example, is an excerpt from the chapter about the Mossadeq coup:

“The CIA’s Roosevelt and Wilber now travelled to London with the coup proposal they had drafted together in Cyprus. After meetings with MI6, a reworked version emerged. The plans were next submitted to the Americans at the famous July 25 meeting mentioned earlier. Churchill greenlighted the operation on July 11. (Woodhouse notes that “Churchill enjoyed dramatic operations and had no time for timid diplomatists) Wilber instigated what he described as “a war of nerves” with the help of two Iranian assets, code-named Nerren and Cilley. A CIA courier arrived with a large number of anti-Mossadeq cartoons and posters that enabled Wilber to launch a massive propaganda campaign aimed at discrediting Mossadeq’s government. Articles stressing the communist threat were planted in the foreign and local press. Intelligence networks were meshed, and agents provocateurs, specialists in inciting trouble that could be blamed on the communists, were hired. Weapons were distributed to the tribes. An armed gang kidnapped, tortured and killed Tehran’s chief of police. The Grand Ayatollah conveniently issued fatwas against the communists.”

The fall of Mossadeq led to the transformation of the Shah from an insecure figurehead to the tyrant finally deposed by the Iranian revolution of 1979. Is it any wonder that today’s Iranian regime delights in referring to the US and Britain as the Great Satan and the Little Satan respectively?

Kingmakers is full of stories of high-minded imperial idealism as well as lies, duplicity and treachery in the name of national interest. The characters in the book range from benevolent paternalists to comic buffoons.

In and out of the narrative step the local protagonists – King Abdullah of Transjordan, King Faisal of Iraq, Gamal Abdul Nasser of Egypt, David Ben Gurion of Israel, Hafez Assad of Syria and King Abdulaziz of Saudi Arabia to name but a few.

Connections abound. H Norman Schwarzkopf, father of the Desert Storm commander of the first Gulf War, stiffening the backbone of the wavering Shah during the Mossadeq coup. Kim Philby – son of Harry, who was instrumental in helping the US gain the Saudi oil concession – a drinking buddy of  Miles Copeland in Beirut before disappearing to Moscow after being unmasked as a Soviet spy, bringing with him his wife, who was formerly married to the CIA station chief in Lebanon. Boutros Ghali, the Egyptian Prime Minister assassinated in 1910, who was an ancestor of Boutros Boutros Ghali, the recent Secretary General of the United Nations.

The only connection I can claim with the dramatis personae is that in the 70s the sound equipment company I managed worked for The Police on a few occasions. The Police’s drummer was Stewart Copeland, son of Miles Copeland. From CIA agent to rock star in two generations. So it goes.

Kingmakers is not only compelling history but also gripping narrative. A must for anyone interested in getting under the bonnet of today’s Middle East.

One Response to Kingmakers, Invention of the Modern Middle East