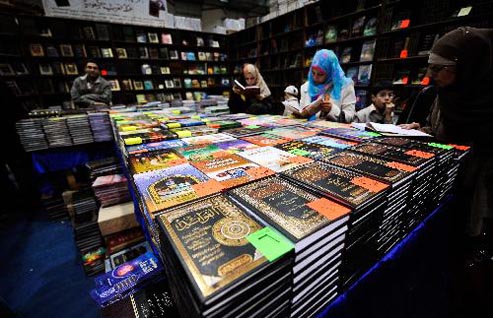 Seven of the 16 writers on this year’s longlist for the International Prize for Arabic Fiction (or “Arabic Booker”) are women, a fact that has been both ballyhooed and poo-pooed by observers. Among the longlisted women are the highly regarded Miral al-Tahawy, for her acclaimed Brooklyn Heights; Renee Hayek, who was previously on the 2009 IPAF longlist for her Prayer for the Family and is now longlisted for A Short Life; and prominent Saudi author Raja Alem, for her The Doves’ Necklace.

This follows several years where women had a much smaller space on the list.

Zaydan tells Youm 7 that the near-equality of the longlist is a good step. But Zaydan added that women’s writing—while strong—is still not taken seriously, and is treated as ancillary to men’s writing.

Writer/translator Fatima Naaot also told the paper she didn’t see literary prize mechanisms as free and fair. But Naaot instead blamed the lack of prizes for women, to a greater extent, on women who are under the influence of male-dominated society.

As to myself, I do think that we’re likely to see two women’s names on the six-book shortlist this year: Why not? I also think it’s difficult to talk about an Arabic Booker aesthetic, as the award has only been in operation for a few years now. But  it does seem to favor a sort of big-scope, historical-sweep novel, rather than the psychological or experimental or domestic.

(Female) author Lionel Shriver talks about the same issue in The Independent in a piece headlined “Let’s up our game, not exclude men.” The only way to truly narrow the gender divide in literature is for female novelists to write some great books, says Shriver.