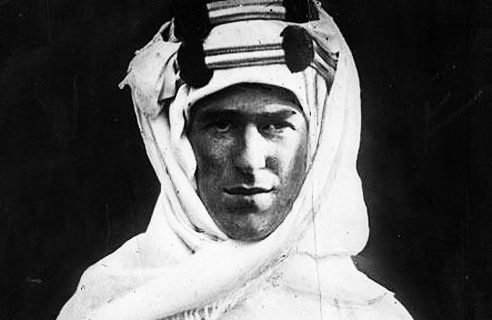 A new book has appeared by Michael Korda entitled The Life and Legend of Lawrence of Arabia (Harper/HarperCollins Publishers, 762 pages). A review by Ben MacIntyre was published in yesterday’s New York Times, the beginning of which I attach here.

Lowell Thomas, the pioneering American journalist and filmmaker, was buying dates on a Jerusalem street soon after the holy city had been wrested from Turkish control by British forces in 1917, when he spotted a group of Arabs, led by a most remarkable figure. “A single Bedouin who stood out in sharp relief from his companions; . . . in his belt was fastened the short curved sword of a prince of Mecca, . . . marking him every inch a king. . . . This young man was blond as a Scandinavian. . . . His expression was serene, almost saintly, in its selflessness and repose.”

The robed figure was T. E. Lawrence, Lawrence of Arabia, Laurens Bey to his Arab comrades in arms, the “Uncrowned King of Arabia” according to his boosters. And if Thomas’s description seems sensationalist, that is hardly surprising, for the American did more than any other single person to turn Lawrence into a glittering multimedia global celebrity, a fable, a saint and a myth.

Lawrence was an ambiguous figure in his lifetime, and has remained so ever since, in part because the fog of fame made it virtually impossible to see him clearly, then and now. He was a scholar and warrior, an imperialist and supporter of Arab independence, a politician and rebel, a publicity seeker and recluse. Fighting alongside Arab irregulars in the revolt against Turkish Ottoman rule during World War I, he was fanatically brave and chillingly ruthless. He was fastidious, inconsistently vegetarian, sexually repressed, allergic to physical contact and addicted to danger, flagellation and roasting baths. He was fabulously weird.

Most treatments of Lawrence’s life can be divided into debunkings and hagiographies. “Hero” by Michael Korda, as the title implies, is closer to the latter category. The author’s admiration frequently comes in volleys: “physical courage, hardiness, cool judgment under fire,” “an outstanding shot, physically tireless, generous, absolutely fearless, gentle in manner.” Yet into this baggy but beguiling biography, Korda, the author of several works of history, has also crammed the darker incarnations of Lawrence, the shy depressive, the tortured ascetic, the “odd gnome, half cad — with a touch of genius,” in the words of one of his companions behind Turkish lines. This book, for all its worship of Lawrence, leaves the impression that his heroism lay in a unique brand of personal eccentricity, a refusal to fit into the expectations of others, an unshakable determination to do things his own way, however peculiar and wrong-headed this seemed.