Is There or Ain’t There Arabic Science Fiction? 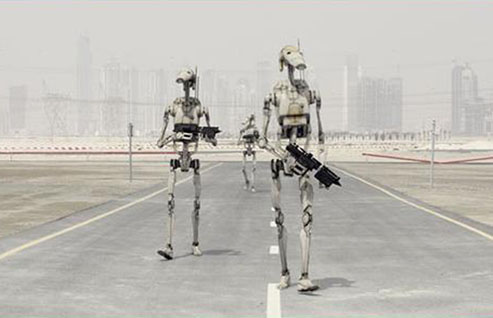 Last year in The Guardian, Nesrine Malik published a widely-quoted lament about the disappearance of science fiction from contemporary Arabic literature.

Malik, like sci-fi commentator Achmed Khammas, blames a culture of fatalism, a focus on the (glorious) past, and a lack of science education.

Older Arabic texts—such as 1,001 Nights and Al-Farabi’s Opinions of the Residents of a Splendid City–are replete with science fictional elements. Of course, as we know, Arabic thinkers were once at the forefront of science.

But what about now? In an article for today’s Guardian, writing about the Golden Age of Arabic science, Tim Radford ends his assessment by saying that Arabic science has faltered: “In 2005, scientists from 17 Arab countries produced 13,444 scientific publications. Harvard University alone that year produced 15,455.” And Arabic sci fi? Has it also gone the way of Jabir ibn Hayyan?

I am hardly a sci-fi expert, but there do seem to be stirrings on the Arabic science fiction horizon. Of course there is the very popular Egyptian sci fi author Ahmed Khaled Tawfiq, who has written more than 200 books, mostly horror and science fiction. His Utopia should appear in English translation next year, courtesy of Bloomsbury-Qatar.

And, at the second annual Arab SF convention (held in August 2009 in Damascus), critics talked about the importance of the genre. Meanwhile, over in Tunis, the Arab League Educational, Cultural and Scientific Organization (phew, ALESCO) discussed plans for an Arabic SF literary prize, as well as a database and association of SF writers.

Even the skeptical Khammas noted, in a 2006 article, that it’s possible Arabic sci fi is under-assessed, as—well—who’s keeping track of it? Khammas wrote:

Literature experts count 35 SF novels which have been written in the Arab world up to now. This figure cannot be entirely correct, since in Egypt alone there were more than twenty novels published by the turn of the millennium with titles such as “Inhabitants of the Other World” or “Flight into Space” as well as at least 15 collections of short stories (e.g. “Save this Planet” or “Five Minutes to Live”).

I further believe that there is an appetite for Arabic science fiction in Egypt and beyond, or perhaps a futuristic-satiric blend. In a review of Revolution 2053 by Mahmoud Osman, blogger GJoe wrote:

The reason I got this book is that my dad had an idea of writing a book about a futuristic Egypt. We both were disappointed to realize that someone was faster. Bass kanet ro7na ryadaya and we bought the book out of curiosity.I don’t know about you, but I am tired of over-analyzing The-Egypt-Now.

Of course, more than one book about futuristic Egypt would really be all right.

It will be interesting to see next month’s issue of the science fiction magazine Apex, which promised to dedicate its November issue to Arab and Muslim authors. Also, you can learn more about Islam and science fiction at this website so-titled.

UPDATE: A much-appreciated addition from British-Libyan writer Ghazi Gheblawi, who sent me this bibliography-in-progress of Arabic sci fi.

Yet more: I write all this, and then see sci fi on the front page of today’s Qadita. (Not Arabic sci fi, but certainly evincing an interest in the genre.)

Oh, and don’t forget about this! I imagine that the first annual Arabic Comic Con, to be held in Abu Dhabi next March, will also showcase Arabic sci fi.

Thanks to @drawmedy, i.e. Anna Amelia, as well as @ShjIntlBookFair for pointing me in this direction.