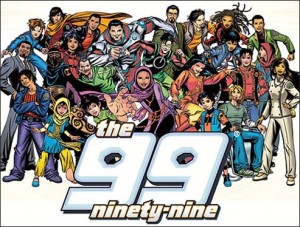 Dr. Naif Al Mutawa—creator of extremely successful comic series The 99—had long dreamt of creating comics. When he was in his twenties in his native Kuwait, he wrote and published his first two books. Both were in English.He wrote in English, he said, because as a younger man—before he’d become exposed to Taha Hussein, Naguib Mahfouz, other greats—”Nothing really grabbed me; nothing was enjoyable [in Arabic].”

His first two books were relatively successful, he said. Then: “Book three got stopped [by censors] and I quit writing at the age of 27. Had I changed a few words, they would have allowed it.” But Al Mutawa was offended by the censorship and didn’t want to change a few words. So “I quit.”

Al Mutawa, who spoke last night to a meager but enthusiastic crowd at the Sharjah International Book Fair, came down firmly against censorship:

In the name of preserving culture, book censorship is really killing it. … People interested in culture are gravitating toward English.

Al Mutawa didn’t mention the wave of censorship that hit the Kuwait book fair earlier this month, but he did say that his home town’s literary festival was the “one book fair” that hasn’t invited him for a visit. (I imagine there are a few in Wyoming and Lichtenstein who’ve also missed out, but take his point.)

Al Mutawa talked about how he later had come to create The 99. At first he resisted the idea, as “I have all these degrees, I’m not going back to writing for children.” But he eventually gave in, and brought his psychologist’s-eye view to the story-creation process:

A good story has a fit. There’s something there inside us already… We’re already wired for it.

I believe strongly that if you boil down things to their symbolic level, nobody will disagree with them.

Award-winning graphic novelist Qais Sedki also spoke on the panel last night at the Sharjah Book Fest, and I write more about that over at Read Kutub Kids.

And: In the audience last night, I came across the two main architects of the region’s first ComicCon, set to be held in Abu Dhabi next March. These two guys were brimming—almost brimming over, really—with energy and information, and ISA I’ll pump them for more about science fiction and fantasy novels coming soon in Arabic, new Arabic comics and graphic novels, as well as more details about the upcoming ComicCon.

For those of you who are aspiring graphic novelists or comic-book authors (as you prefer), the ComicCon pair also promises to have practical workshops to help you structure, finalize, polish, finance, and market your work.