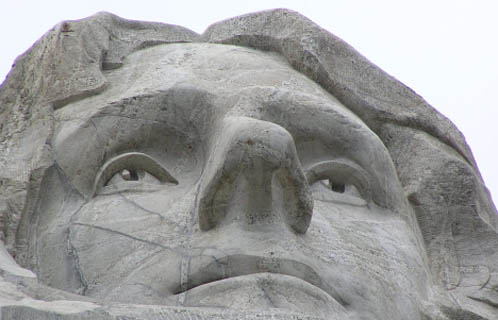 I am excited to announce that the Global Americana Institute has, in partnership with Dar al-Saqi of Beirut brought out a volume of selected writings of Thomas Jefferson in Arabic. It was elegantly translated by Professors Mounira Soliman and Walid Hamamsy of Cairo University and is entitled in Arabic the equivalent of Revolutionary Democracy: How America became the Republic of Liberty.

It has a powerful, brief introduction by prominent Arab intellectual Hazem Saghieh, an editor of al-Hayat newspaper, which expresses admiration for Jefferson’s political thought while not attempting to paper over his personal foibles. Saghieh notes that post-World War II Arab thought has been strangely unengaged with liberal democratic ideas, especially in their American incarnation, but that that is a shame since figures such as Jefferson have much to offer. Of course, elite Arab families know English and travel to the United States, and don’t need this translation. But below that five percent at the top of society with regard to wealth and education, there is now a vast literate Arab middle class numbering in the hundreds of millions, who could not deal with Jefferson’s antique English but could read this translation. At least some of them will be interested in doing so.

I am hopeful that the book will find an eager reception in Egypt, Tunisia and other countries yearning for democracy in the Arab world, and in a way, it could not have come out at a better time. Jefferson could be good for them to think with, a colleague from across the centuries and the Atlantic.

We are enormously grateful to kind donors who made this project possible, including Andrew O’Shaughnessy, Saunders Director of the Robert H. Smith International Center for Jefferson Studies, the Center itself, and the Thomas Jefferson Foundation, as well as SNL Financial LC with offices around the globe including Islamabad, Pakistan and Ahmedabad, India, as well as many individual donors who gave through Paypal or credit card.

It has taken much longer to accomplish this major project than I would have liked. But it took time to find willing and able translators, for them to work through difficult eighteenth-century English in an engaging, contemporary Arabic style, and then to find a publisher with good production values and good distribution. We had great good fortune, since there is none better than Dar al-Saqi in these regards. Now that we have such a great partner, we can go forward at a better clip– though in this undertaking, quality is more important than quantity. By the way, Al-Saqi also has a London office that publishes great books about the Middle East in English.

I was inspired to pursue this project by the September 11 attacks and their aftermath, moments of a ‘clash of civilizations,’ or at least a clash of some narrow forces within each civilization. I thought we needed some bridges. It pained me to read the gross mischaracterizations of the United States and its values that were common in the Arabic press and blogosphere. I had long been aware, and annoyed by, the relative paucity of Americana in Arabic bookstores. I carried out exhaustive bibliographical searches and while there are lots of obscure journal and newspaper articles of previous decades, what you can get your hands on in an actual bookstore or at a book fair today is quite limited. The US State Department has a translation program in Amman, Jordan and in Cairo, Egypt, which does excellent work, but there is room for more such endeavors and the list of what is translated is so short that there isn’t much danger of overlap.

Please consider donating to the Global Americana Institute, which is a tax-exempt, 501(c)3 charity, at its web site, which has a credit card form and an address for sending checks. Donations will allow us to translate more works (including a biography of Martin Luther King), as well as to help with distribution of the volumes and mounting workshops for professors who might teach them. Arabic-knowing university professors and students at Western universities should please urge libraries to order it.

Journalists sometimes ask me if there isn’t something Orientalist or imperialist about translating Americana into Arabic. It is a fair question, but it seems to me not a very useful one. First of all, I started studying Arabic when I was 19, and I have spent my life with the great Arabophone authors, from al-Ghazali to Naguib Mahfouz, from Abu Hayyan al-Tawhidi to Nawal Saadawi. I myself translated three books from Arabic into English by Lebanese poet and novelist Kahlil Gibran. I am grateful for what they have given me and how they have enriched me, and I don’t consider myself colonized by them.

Intellectual interchange is not a zero-sum game, as medieval Muslim intellectuals delighted in pointing out. The Qur’an itself says, 49:13 (al-Hujurat), “We created you from male and female and made you peoples and tribes that you might know one another.” And the Prophet Muhammad is said to have commanded, “Seek knowledge, even unto China.” In the glory days of classical Islam, there was a translation movement seeking to put Greek philosophy and Sanskrit astronomy into Arabic, not a sullen fundamentalist fear of intellectual interchange.

Second, translation of the great works of Western literature has been central to the Arab renaissance and modern Arab culture. I wrote my MA thesis on Rifa`ah al-Tahtawi, who translated loads from 19th-century French. Early Egyptian nationalist Ahmad Lutfi al-Sayyid translated John Stuart Mill. Pioneering Egyptian novelist Taha Hussein translated Shakespeare. Arabophone literature interacted mainly with the colonial metropoles of France and Britain, and the distant United States was seldom an object of interest for them. With the rise of Arab nationalism and Muslim fundamentalism from the 1950s forward, Washington was often seen as being on the wrong side of history by Arab authors, and that sentiment discouraged translation, especially of political thought.

But the United States has been a major force in the world for many decades, and it is frankly bizarre that it is so little represented in Arabic translation. I don’t fool myself that such books will be best-sellers, but I do hope that interested Arabophone intellectuals will benefit from them and interact with them, and gain a fuller appreciation of the depth and texture of the United States, beyond just political maneuvering and Hollywood.