A Force for Freedom, Mohamed Hashem 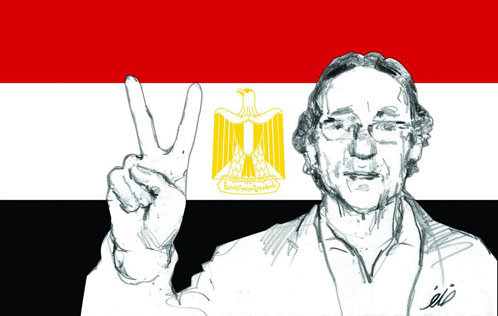 At a press conference today, award-winning publisher and author Mohamed Hashem was the target of accusations by General Adel Emara, member of Egypt’s Supreme Council of the Armed Forces (SCAF). The council aired video footage wherein a young man claimed Hashem had participated in acts of “sabotage,” distributing helmets and blankets and inciting violence.

Hashem himself responded by saying he would not stop aiding revolutionaries. According to Ahram Online, he said: ”They want to be killing and injuring people while we stand still and not offer help?”

Hesham also said that the military council has to be forced to step down since they “kill people and defame people politically.” (More from Hashem on Ahram Online.)

Hashem was born in Tanta in 1958. He has worked as a reporter and is the author of a number of novellas and short stories, as well as the novel Open Playgrounds (2004).

In 1998, he helped found Dar Merit. Since then, Hashem has both led the vibrant publishing house and been instrumental in the founding of Kefaya and its affiliated “Writers and Artists for Change” movement. As a publisher, Hashem has fostered a number of new currents in Egyptian literature, including popular and pioneering novels by Ahmed Mourad, Alaa al-Aswany, Mohamed Mansi Qandil, Hamdy Abu Golayel, Mohamed al-Refai, Miral al-Tahawy, and others. Dar Merit — through its stance against social and governmental censorship — has opened up new possibilities for Arabic literature.

(Did you know, men of the military junta, that three of the four ministers of culture who took office after the revolution have published their books with Dar Merit?)

Immediately after the statement, dozens of authors, publishers, and others signed a statement to “reject the false accusations” against Hashem, who has won a number of awards for publishing, including the 2011 Herman Kesten and the 2006 Jeri Laber International Freedom to Publish award. (You can sign the statement on Merit’s Facebook page.)

Back in 2006, Hashem told Al Ahram Weekly: “If we have any bias [in Merit], then it is a bias for new writing and writing that resists censorship.”

From the 2011 Herman Kesten Award:

“As a publisher, Mohamed Hashem has created an world of thought in which the Arab reform movement has found its intellectual breeding ground. Situated close to the Tahrir Square, his small publishing house was called a Kaaba for the intellectuals.”

Boyd Tonkin, of The Independent:

“No publisher in the world has impressed me more than the merrily intrepid Mohamed Hashem of Dar Merit in Cairo, thorn in the side of minister, general and imam alike.”

Qantara: A Father of the Revolution

@nehayanashed (Nehaya Nashed): @gamaleid what did Dar Merit do? Please explain! it’s one of my favorite publishing houses!

@Atef_IS (Mohamed Atef): We are all Mohamed Hashem #Tahrir

@TheCaireanFeed سبعاوي: MOHAMED HASHEM IS ON FIRE ON @ONtveg !! Urging to try SCAF generals..screaming at the top of his lungs! Beautiful! #Egypt #Tahrir