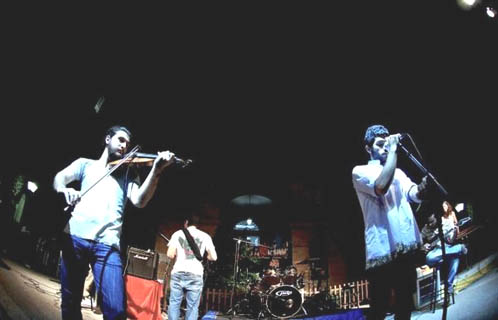 Remember the name Mashrou Leila (Leila’s Project), because we guarantee this band will become a household name very soon.

Dubbed Beirut’s Arabic-language rock fusion pioneers, the Lebanese seven-piece group is set to perform live in Dubai, UAE this evening — their second appearance in the emirate — and tickets are selling fast.

Tell us a little bit more about Mashrou Leila…
We are five architects, a graphic designer and an engineer. We all met while studying at the American University in Beirut. Some of us are still there finishing up our under grads.

Has that encouraged others in Lebanon to follow suit? Do you want to be ambassadors for more students in the region to be encouraged to experiment with music?
The local music scene in Lebanon has definitely been booming, more and more independent acts are forming and concert attendance has been on the rise. It’s hard to say whether our recent success has been a by-product or the cause of this. It’s probably a little of both.

We’ve been actively pursuing performing in college settings throughout the Middle East. I don’t know if that means that we are the ambassadors of independent music in the Middle East, but the hope is that people who come to our shows will get inspired to start listening and writing their own music. Anything other than that Arabic pop rubbish they are flooding our ears with would be a welcome change.

Is it harder to break into the popular music scene when you take on a genre that is not so common (in comparison to the likes of Haifa Wehbe or Fares Karam, for example)?
Sure it’s harder to break into the music scene with that kind of genre. But this is mainly due to the fact that there is a severe lack of infrastructure and funding for that kind of music. A lot of people can’t stand Arabic pop and have to resort to the West for their musical needs. We are hoping to fill that gap by providing local music that isn’t in the stale and formulaic format as Arabic pop while maintaining our Middle Eastern identity.

We should be getting back to writing soon, how much influence the current situation will have is yet to be seen.

The death of Osama Bin Laden: true or conspiracy in your opinion?
No clue. Guess it’s probably true.

What are your ambitions? What would you like to achieve in the next five years?
Well, we have two goals: the first is a second album with legit production, recording and mixing. This would really be a step up for us, since we literally wrote and recorded our first album between classes and on a ridiculously low budget.

The second is proving that Mashrou Leila is profitable. Not because we are hoping to make a living out of it — after all, we all have our own separate careers on top of Mashrou Leila. But because doing this would get record labels, managers and concert promoters interested in working with local bands and independent musical acts. This in turn would encourage more local musicians to take their music more seriously by making their lives easier.

Is there any artist — Arabic or Western — you would like to collaborate with?
We are always looking to collaborate — whoever, whenever, as long as there is a chemistry.

Those seeing you for the first time, what songs do you recommend them to listen to before heading out to your show?

We love all our songs equally, but if I had to pick I’d say Fasateen, Oubwa, Sheem il Yasmeen and Raksit Leila.