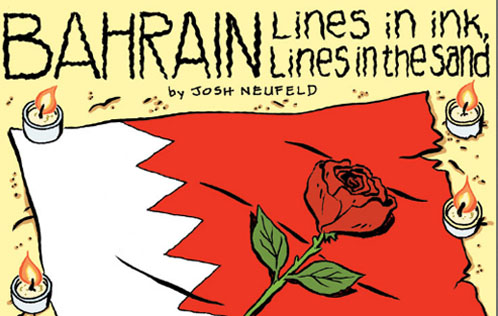 At the intersection of creative appropriation, translation, cartooning, and journalism, Josh Neufeld creates his “Bahrain: Lines in the Sand.”

Neufeld wasn’t in Bahrain during the recent protests that were violently put down with help from Saudi and UAE soldiers, but he cartoons about them nonetheless. How? Through the lens of two emerging cartoonists he met while visiting the nation in 2010: “Sara” and “Mohammed.”

Neufeld begins his narrative with his 2010 trip, after which he was Facebook-friended by Sara and Mohammed. He later interacted with them (digitally) during the uprising in Bahrain.

So far, a pretty thin claim to expertise.

But Neufeld’s “Sara” and “Mohammed” are both, like him, graphic artists. More specifically, they are graphic artists who are actively telling their nation’s story. When Neufeld re-shapes the Bahrain narrative as his own, he embeds their very different work (Mohammed is a protester; Sara is pro-government) within his.

Cartoon Movement editor and cartoonist Matt Bors, who commissioned the work, told the Washington Post, “I like the way Josh incorporates the real cartoons of Mohammed and Sara and their opinions without judgment.”

But Neufeld’s narrative is certainly not without judgement (is such a thing even possible?). In the last frames that include Sara, her face changes into something sharper and uglier than it was in the opening frames. And it ends with the far more sympathetically drawn Mohammed saying, “Of course I am Shia and I am proud.”

What’s interesting here, of course, is not Neufeld’s alleged even-handedness, but how he uses—and translates (see above)—Sara and Mohammed’s work, embedding it into his own.

Thanks to Bint Battuta for sharing this. If you don’t follow BB on Twitter, perhaps you should.