Art’s Struggle to Define Who & What is ‘Tahrir’ 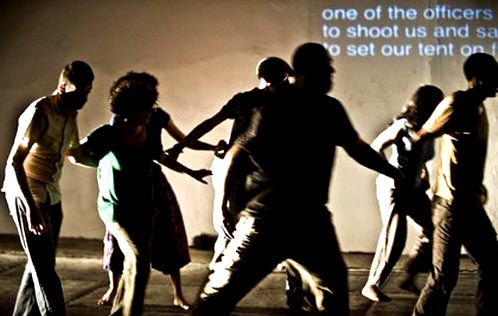 Visual and literary arts enter the contested space where a nation defines “Tahrir.”

Hers is just one of many artistic projects rushing out into the public squares, streets, theaters, bookstores, art houses, and elsewhere. Some are just riding the coattails of a (sometimes) popular movement. But others are struggling to define both what is Midan Tahrir and what is ta7rir (liberation).

As Amany al-Shawky notes in Al Masry Al Youm, the theatrical “Tahrir Monologues” project continues with a third season. The shows, which began last May, are now drawing packed houses, al-Shawky writes, for performances at the Rawabet and Jesuit theaters. The monologues feature theatrical memoirs from the Jan-Feb uprising.

Novelists and poets are also trying to articulate the meaning of revolution in print: There is Ahmed al-Sheety’s One Hundred Steps of Revolution: Diaries from Tahrir Square,  Ibrahim Abdul-Maguid’s Days of Tahrir, poet Abdul-Rahman Youssef’s Diaries of a Cactus Revolution, and many more. Acclaimed novelist Ahdaf Soueif will be adding her voice to this in early 2012 with Cairo: My City, Our Revolution in English and in Arabic.

Syrian novelist Samar Yazbek, now residing in Paris, has also just finished a revolutionary narrative about Syria, which will be out in French in March 2012. An excerpt appeared in English in The Guardian.

From Libya’s struggles came Khaled Mattawa’s incredible poem “After 42 Years“; I’m not sure if an adequate Arabic translation has appeared.

New publications like Rolling Bulb offer a mash-up of pioneering graphic arts and text. If anything, I am expecting some brilliant new graphic-novel work (or a new form entirely) to come out of Cairo. I will be surprised if the explosion of graphic arts and narrative doesn’t bear some incredible fruit.

Dina Adel, writing in The Global Post, asserts that all this means art in Egypt (and perhaps beyond) is undergoing a renaissance, another Nahda. But perhaps this prediction, like so many other things, depends on how the coming months shake out.