A Monument of Tolerance in the Heart of Dubai 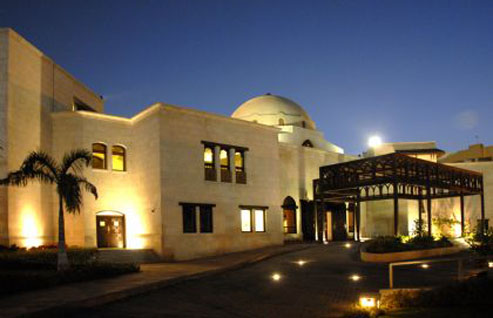 Nestled in one of Bur Dubai’s older districts is one of the emirate’s best kept architectural secrets: the Ismaili Centre of Dubai. It is a 13,000-square-metre structure designed by the Egyptian duo Rami El Dahan and Soheir Farid, who drew inspiration from Cairo’s Fatimid mosques.

This prime plot of land was generously given to the Ismaili community by Sheikh Mohammed bin Rashid, in 1982 prior to becoming Ruler of Dubai to celebrate the Aga Khan’s Silver Jubilee as the imam of the community. It is a testament to Sheikh Mohammed’s long-term vision and respect for other cultures that such a generous donation was given when he was 33 years old. Today, because of this long-term vision, Dubai is a culturally and architecturally richer emirate.

The structure was inaugurated in 2008 by Prince Karim, the Aga Khan, in the presence of senior UAE officials. A 3,000-square-metre public neighbourhood park was also created on parts of the land based on Islamic garden themes.

With its magnificent domes and arches, the limestone-coloured structure transports visitors back to an era of craftsmanship: a large, white marble fountain greets visitors in a high-ceilinged lobby with an octagonal entrance and a brick-inlaid dome. This was the structure, I felt, that the master craftsmen of bygone eras would have produced if they had had today’s technology. The masons were flown in from Cairo and learnt this rare skill from some of the greatest brick-dome builders in Egypt, including Hassan Fathy.

The architecture is an amalgamation of everything that is beautiful in Islam. From the outside, honeycombs of amber and limestone embrace the building. The sun’s shadow creates ever-changing patterns that merge in and out of each other as the day proceeds. The tranquil sounds of the fountains soothe the soul as one wanders around, admiring the antique Islamic artifacts on display. The building is crowned by a magnificent Ibn Tulun Mosque-like dome, not too different from the one above the Museum of Islamic Arts in Doha. The Morning Prayer Hall courtyard features a salsabil, or paradise water fountain, as its centrepiece, while the main garden is inlaid with a network of small water canals connected to a central fountain.

The Ismaili sect of Islam dates back to the branching out of the Sunni and Shia schools of thought many centuries ago. While it is considered to be an offshoot of Shia Islam, it has maintained an independent religious authority.

The most recognised member of the Emirati Ismaili community was the late Noor Ali Rashid, the pioneering photographer who passed away last August at the age of 80, a short time after the centre hosted an exhibition of his works.

As a result of the tireless efforts of the Aga Khan, the Ismailis are perhaps best known today for their respect for art and culture. The Aga Khan Award for Architecture, which dates back to 1977, was established by the current leader of the Ismailis “to identify and reward architectural concepts that successfully address the needs and aspirations of Islamic societies” in fields as varied as contemporary design, social housing and community development. Projects that lead to the improvement and restoration of historic structures are also highlighted and awarded.

However, it is far from being an award strictly for Muslims. In fact a number of non-Muslims have won the award, including Jean Nouvel, the French architect behind the Louvre Abu Dhabi, for his designs of the Institut du Monde Arabe in Paris. Many other projects that have been awarded the prize also serve multi-religious and multi-ethnic communities, such as those in Africa, India and parts of the Middle East.

For the first time next month, the awards will be held in the Gulf, when the state of Qatar plays host. Two Gulf-based projects are among the 19 finalists vying for the award: the Wadi Hanifa Wetlands in Saudi Arabia and Qatar’s very own 164,000-square-metre century-old open-air market known as Souk Waqif, which went through a major three-year renovation project.

In addition to hosting classical music concerts, the Ismaili centre in Dubai recently inaugurated a modern school for children where instruction in English and Arabic are given equal emphasis, a rare phenomenon for non-Arab schools in the UAE.

Having just returned from a visit to southern Spain, it wasn’t just the architecture of the Ismaili Centre of Dubai that seemed familiar. The spirit of tolerance and respect embodied by Sheikh Mohammed bin Rashid allowed Dubai the opportunity to flourish. That was the very spirit that existed in Andalusia for centuries under wise Islamic rule where Jews, Christians and Muslims lived, worked and created side by side in peace and harmony. When the history of modern Dubai’s architecture and tolerant spirit is written, this building will occupy a very special place indeed.