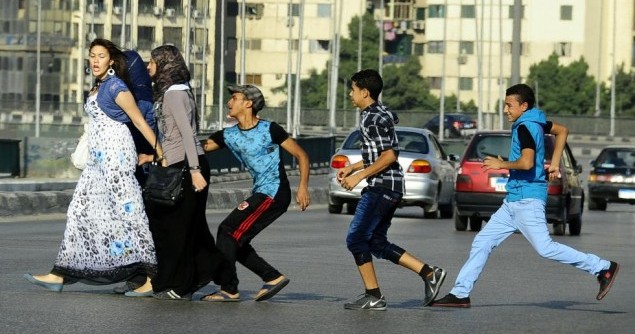 There have been a number of initiatives over the years aimed at combating the problem, the majority of which have been volunteer-based. However, one of the most fundamental and apparent changes underreported in international media has been the increased pervasiveness of men’s involvement in fighting sexual harassment in Egypt. Men stepping up to tackle this problem shows that they are recognising that this is not a “women’s issue” but one affecting society as a whole.

Welad El Balad (The Country’s Children) is an excellent example of a male-led initiative to fight sexual harassment. Founded by Karim Mahrous in 2011, the group trains its volunteers on the legal, psychological and social implications of sexual harassment so they can effectively engage with their communities and raise awareness of the problem and its consequences. They also focus on encouraging women to report incidents of sexual harassment to officials.

According to a 2008 report by the Egyptian Centre for Women’s Rights (ECWR), more than 80 per cent of Egyptian women have experienced sexual harassment. Given that a mere 2.4 per cent reported the incident, Welad El Balad’s attempt at encouraging women to speak up is important.

In fact, there are a number of groups that involve men and women actively working together against sexual harassment.

Estargel (Be a Man) is a volunteer-led initiative launched to tackle the problem of men riding in the women-only carriage in the Cairo underground metro. The efforts of both male and female volunteers have led to metro officials launching a hotline for women to report incidents of sexual harassment and men riding in the women-only carriage of the trains.

Another group, Imprint Movement, organises patrols that monitor underground metro stations to stop harassers during Eid, a time that has become a season for sexual harassment in Egypt, perhaps due to large gatherings in public spaces. Harassmap enables victims of sexual harassment to report incidents via SMS, which are then mapped onto a public website. The map illustrates where harassment “hotspots” are. The tool alerts police, as well as community members, about the issue, and encourages communities to stand up to sexual harassment.

Importantly, half of Harassmap’s volunteers are men.

These volunteer-led initiatives are undoubtedly positive steps forward. However, because the problem is widespread in Egyptian society, it requires a comprehensive approach that includes short and long-term initiatives to reduce the social tolerance of sexual harassment.

Education and a review of the legal framework when it comes to criminalising sexual harassment and effectively enforcing legislation are imperative in this regard. However women alone are unlikely to create a paradigm shift in the way Egyptian men perceive and respond to sexual harassment. This is especially true given that approximately 62 per cent of men actually admitted to sexually harassing women according to the 2008 ECWR report.

This finding emphasises the need for men to play a pivotal role in eradicating what has become a critical problem in Egypt. Their stance is paramount to changing the tolerance society has developed towards sexual harassment. Men’s involvement in fighting sexual harassment denotes that there is a growing awareness that the impact of sexual harassment is not confined to individual incidents, but has a detrimental impact on women’s overall participation in society.

The fact that Egyptian men are actively fighting sexual harassment alongside women shows there is a slow but certain shift in attitudes in the largely conservative and patriarchal society, and perhaps a paradigm shift in the way Egyptian men perceive and respond to sexual harassment. These changes suggest that Egyptians, both men and women, realise that hindering women’s public participation in society will only impede the country’s advancement – and that both men and women tackling the problem together is good for Egypt as a whole.

Nihal Magdy is a British Egyptian Muslim blogger and Marketing Specialist based in London.