The Many Ways To Tackle The Issue of Domestic Abuse 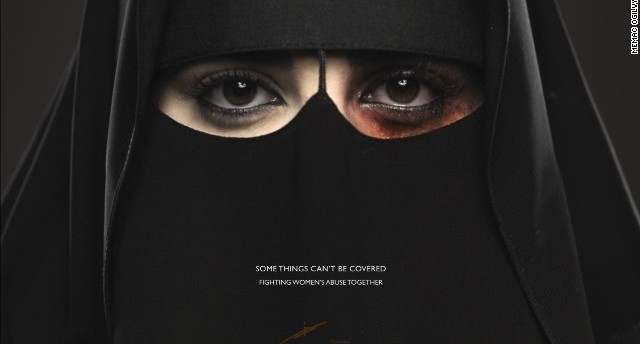 In the fight against domestic violence, every victory is to be celebrated. Late last month, Saudi Arabia approved a law to make domestic abuse a criminal offence. This is a leap forward in paving the way towards a clear public standpoint, that violence against women is not acceptable and there are no excuses for it.

Violence against women, particularly by family members and partners, is all too often tolerated, with the excuse that it’s a private matter. The legal change follows a summer advertising campaign that featured a woman in a black hijab and niqab, with a very visible black eye. The advert carries a clear caption: “Some things can’t be covered – fighting women’s abuse together.”

The image is at once familiar and disturbing. Its simplicity unapologetically highlights the issue.

The campaign raises the subject of domestic violence in a society that doesn’t publicly acknowledge or challenge the problem. The blind eye to violence, the tacit acceptance of it, is a trap for abused women, for which everyone in society bears responsibility. So the advert tells each abused woman she is not alone, and that her suffering no longer needs to be hidden.

Over on the subcontinent, an Indian charity has been running a campaign about the prevalence of domestic violence. Those adverts feature goddesses revered in Hindu tradition, showing marks of violence on their faces and bodies. The caption reads: “Pray that we never see this day. Today more than 68 per cent of women in India are victims of domestic violence. Tomorrow, it seems as if no woman shall be spared, not even the ones we pray to.”

Taking on the issue of domestic violence through a society’s own icons – the niqab in Saudi Arabia and goddesses in India –sends a powerful message. Both campaigns highlight the contradiction at the heart of these societies, by pointing out that the pedestals upon which women are supposedly placed do not really exist, in fact the opposite is true; women suffer oppression.

The hijab and niqab are explained as an honour for Muslim women, a protection and a symbol of their high status in Islam. Yet these adverts show how this modesty is twisted by the perpetrators of violence.

The Indian campaign highlights a similar contradiction – that the divine feminine is revered, and yet women themselves are beaten and abused.

There are criticisms of these adverts. The Indian campaign is obviously at risk of trapping women on their pedestal, by setting the goddess as the standard for women to live up to; they can then be berated for falling short of that unattainable standard.

In the UK, a dramatic advert called The Cut showed Keira Knightley returning home from filming and being confronted by her boyfriend, who accuses her of having an affair. He attacks her and we see her being kicked repeatedly as she lies on the floor.

But then she yells “cut” to stop the filming – but the kicks continue. In this case, we see how women can be held to standards of beauty and celebrity, but behind closed doors can face violence. Ironically, that advert was condemned as too violent.

No campaign on such taboo subjects can be without controversy. These adverts should make society open up about the double standards to which women are held. At the same time, the taboo about domestic violence must be broken permanently.