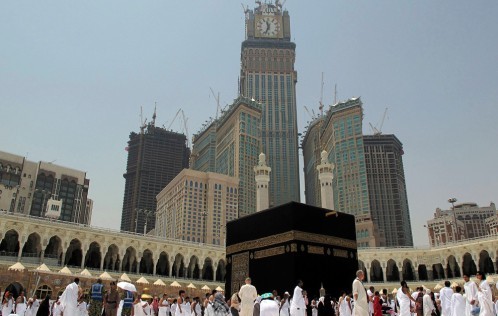 The Holy city of Makkah has already undergone a significant facelift with the construction of the Makkah clock tower as well as expansion of the Haram to accommodate more pilgrims.  Many Saudis would not recognize the Makkah of today as compared to the simplistic Makkah of the past.

Now Makkah is starting to become a high rise city like Jeddah.  What has remained of the old Makkah near the Haram is going to be razed and destroyed to make way for the new commercialized Makkah.

7000 properties are scheduled to be destroyed of which 4000 of the properties are residential housing.  These properties are to be destroyed for further expansion and accommodation of pilgrims.  But what about the people, the families, who are forced to give up their homes?  Yes; they will be compensated but monetary compensation does not necessarily make up for the memories and the proximity families enjoyed to the Haram.  Besides, it is not easy to relocate where there is no choice.  Even properties on the outer borders of Makkah are not cheap and have risen in cost over the years with the ongoing expansions.

“Seasonal accommodation for pilgrims constituted about 70 percent of business for 35 to 40 percent of investors who were from outside Makkah.”  Is this fair to the old time residents of Makkah?  How truly necessary is further expansion?