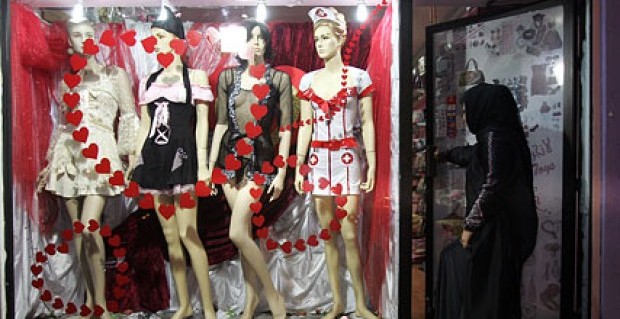 “News of the inauguration of a sex shop in the Moroccan city of Casablanca did not stir the ethical and religious controversy expected to take place in a conservative society, but it did take on a political dimension as suspicions arose over an anti-government ploy. The timing of the inauguration of the first sex shop in Morocco drove several activists to view the action as a political one aimed at embarrassing the new Islamist Prime Minister Abdelilah Benkirane appointed in November 2011”.- Al Arabiya News

After our tongue-in-cheek article yesterday about Morocco’s first female private detective, we could hardly believe the news reported by Al Arabiya, that a sex shop had opened in Casablanca – or maybe it hadn’t. It looked like a case for Myriam Marzak to investigate. Ibn Warraq reports.

According to unsubstantiated reports, the first shop to sell publicly sell sex products is said to be located in Casablanca’s  densely-populated Jamila  neighbourhood. Yet, a search of the area failed to discover it.

Talking to locals at Les Fleurs Café, opposite the Royal Mansour Hotel, we were told that the shop specialises in selling sexy apparel, creams, ointments, pills, and other substances that enhance sexual performance. However, none of our informants actually knew the address of the shop.

Jamila resident, Idriss, told us that there had been a YouTube video about the shop. But when we logged on to take a look we discovered it had been removed.

The sex shop opening was claimed to be a clear anti-government ploy because all news organisations that reported the story started their articles with the same sentence: “Under an Islamist government, a sex shop has been inaugurated.” Or as Bladi.net put it, “The shop has decided to launch his astonishing activity when an Islamist party, the Justice and Development Party, rose to power.”

According to Al Arabiya, the timing of the inauguration of the first sex shop in Morocco drove several activists to view the action as a political one aimed at embarrassing the new Islamist Prime Minister Abdelilah Benkirane appointed in November 2011.

As their comments on social networking websites Facebook and Twitter revealed, they argued that the news might not be true in the first place and that the revolutionary February 20 Youth Movement, known for its criticism of Benkirane and his Islamist Justice and Development Party and for its protests demanding democratic reforms, might have spread this rumour on purpose.

Then our investigations unveiled a cheap pamphlet that was supposedly handed out in the streets of Jamila.

Sceptics visited the address mentioned in the pamphlet and found out that it is located in a working class area and turned out to be the house of a modest family that knows nothing about the whole issue. “There is no way residents of a working class area would allow the opening of a sex shop,” wrote one activist on Facebook, “Those neighbourhoods are usually conservative and take pride in their Islamic identity.”

Another activist, who writes under the nickname al-Aati Allah, argued that putting corrupt people in jail is a much more important issue than the opening of sex shops. “Stealing the money of poor Moroccans is the reason for corruption and not the sale of sex toys or alcohol or even drugs,” he wrote.

There appear to be competing theories. One is that it this is an attempt to embarrass the new prime minister, the other is that it is a way of discrediting the February 20 Movement.

And for those wondering about the sex shop industry in Morocco, the news website Febrayer.com, sex aides have always been sold in Morocco but in secret and under the guise of cosmetics. The trade’s popularity and high profitability drove a group of youth to open the shop.

The first sex shop in the Arab world, “Kadi Jia House”, opened in Lebanon in 2007. The shop hostess, 32-year-old Kadi Jia, said at the time,”This is not like the Western countries that sex shops, but we have the greatest potential to help married couples achieve harmony in the sexual life, so that couples feel a close sense of happiness.“