Make it, Eat It: The Wonderful ‘Petra Kitchen’ 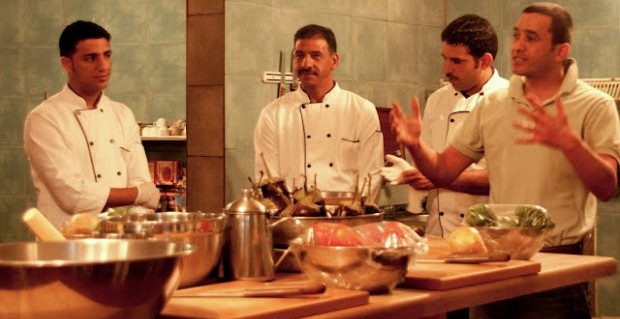 I’m late. The middle east banking sector has let me down again, and the ATM has both refused to give me money and spat my card back out with the unwelcome message “Your pin number has now been changed”, despite no request for it to do so. It now sits with it’s time-out message on its screen. I grimace at it, and it simply flashes back at me insolently. Let’s hope the Petra Kitchen take credit card.

Everyone is at attention when I arrive – neatly arrayed like an army of apron-clad cadets. “So wonderful you can join us, Sarah!” the colonel decrees. I feel like I’m in school, and have only narrowly missed a detention, even though the comment is delivered with a welcoming smile. There are more people than I expected – about thirty have attended tonight’s cookery mission, young and old. There is a man with a Nikon D7000, amiably sticking both his lens into spice racks and up the chefs’ noses. Another travel blogger, I guess. I’m assigned to his group with another three eager cooks and a cheeky looking chef.

Our job is first the soup. Shourbat Adas – a simple lentil brew, with mild spices and chicken stock. It is not unique to Petra or even Jordan. As with most of the dishes on the menu tonight, it is a regional staple with its local stamp coming in the ratio of ingredients and method tweaks (with or without bulghar, rice or chickpeas to thicken, and the additions of mutton or chilli for flavour). Travel blogger washes lentils, and I try and find out why some people have wine while I don’t. Chef twists open a steel canister and thrusts one under my nose. I sneeze. Duh – “Pepper.” I respond to his raised eyebrows. Followed by cumin, tumeric and copious amounts of salt. Each is thrown in the pot, and followed by an extra pinch for luck.

Next we are given knives, and presented with several kilos of tomatoes. “Is the knife dangerous?” someone asks. “No,” says chef, and proceeds to wave it over the ripe tomato and come away with a hundred pieces. “A sharp knife is not dangerous. Just don’t cut your finger off.” He smiles, winks at me and steals my own camera to take photos of me while setting me to work. Travel blogger and I compete amiably but with vigour. I’m faster, but he has more flair, and every time I try and throw the cap in the central bin-bowl, I miss. I decide to cover my ineptitude with comedy, and start flirting with Chef. Due to its lack of believability, it gets very silly, very fast. He catches me trying to show another player how to peel and chop garlic the Jamie Oliver way, and he scolds me for teaching someone to release the pungent oil into the chopping board.

The tomatoes are soon fried off with the garlic and swathes of chilli – “To make…?” he looks at me expectantly. It’s the only dish on tonight’s menu that I haven’t previously tasted many times, and I keep forgetting the name. “Jambalaya Bastardo?” I offer, to a round of giggles. He asks garlic man “Gambler in a bandana?” Chef dies mockingly of a broken heart. “Galaya Bandura” says Travel Blogger, correctly. No problem – he can be the smart one. It’s a tomato salsa with a kick and a cunch (pine nuts), and I tried some elsewhere over lunch. It’s not so terribly revolutionary, but is a welcome companion to the usual array of Arabic mezze for a heat-lover as myself. Chef gave me the opportunity to salt the dish. My companions gasp as I ladle spoonful after spoonful. I’m playing chicken, waiting for Chef to stop me. Eventually the class tell me to stop. While our backs are turned, I spy chef adding a little more.

Lastly, we are given the eggplants. They’ve been baked whole in a slow oven, and smell like a Lebanese restaurant – deliciously herbaceous and smokey. They’re soft on the inside, and the skin has retained its firmness. Chef takes the cap off one and squeezes the innards out like a tube of toothpaste. “There –“ he hands me one, and grins naughtily. “I think even you should be able to handle that…” And I can. I squish it out, mince it up and chuck it in the pot. It’s one of the simplest dishes of the night, only combined with tomatoes, leafy coriander, (the omnipresent salt) lemon and a flourish, a very large flourish of olive oil. Chef stresses the difference between babaganush and moutabel – the former (translating loosely as “sugar-daddy”) is a salad, whereas the latter is a dip.

The entire group is pulled over to one of the stoves and its Arabic-family-sized aluminium pot for the making of the maglouba (which I found remarkably similar to the Emirai Fogat Diyay), which translates as ‘upside-down’ (Fogat Diyay means chicken on top). I’m Chef’s best mate now, and he passes the spices past me first. “Pepper.”, I say, “cumin”, “tumeric”, “cinnamon”, “cardamom”. Chef nods appreciatively, and with just a smidgen of surprise on his face. After playing the fool all night, he’s convinced my brain is empty I fear.

Before long, we are ushered away from the cookstove, and find our seats at tables cleared of chopping boards and set for a meal. Young men usher our mezze in – fattoush, tabouleh, babaganush, za’atar bread, which we smear with the wonderful galaya bandura. We pour soup for each other, praise our own dishes, test the ones we were not involved in.

We talk about travel blogging, food, travel and food blogging. We discover our alternative itineraries – we are all travellers here. Some I envy, others I pity, especially those that omit Amman. Conversation flows, and so does the wine. In no time, we are all drinking an Organic Jordanian Pinot Noir Cabernet blend, that is either much better than it sounds, or well masked by the flavours of the food. Our Maglouba is delivered upside-down as promised. I take a photo of the travel blogger missing a photo opportunity and smile inwardly. He comes over later to show me what a lovely job his camera has done with the food, and I smile outwardly and seethe inwardly. Luckily, he and his wife are lovely people, otherwise I might be forced to behave bitterly.

We finish with flakey baclava and a sweet taste on our palates and in our hearts. A night at the Petra Kitchen has been enjoyed.