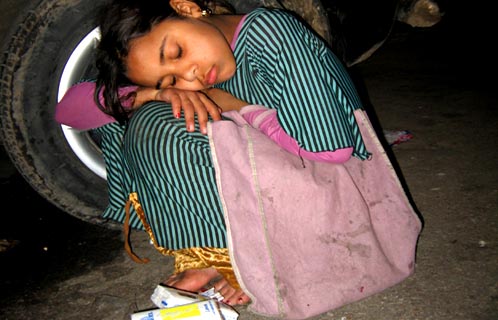 Their souls are pure and untainted; their eyes shine with divine light. They are sent to Earth to enrich the lives of those they encounter. Their smiles are a gift for the gloomy and for those who are tired of the dismal daily life.

Last year, in this time, I met one such angel on the streets of Alexandria. This encounter changed me and awoke emotions I had not previously experienced.

It was one of those noisy nights that draws travelers to a solitary walk along the shore, seeking the fragrance of the Mediterranean and a good place for coffee. Afterwards, happy to have survived the madness of overcrowded streets without traffic lights or pedestrian crossings, I made it safely back across the main road and headed for my hotel, the Windsor Palace.

As I scanned the unfamiliar faces on the street, I spotted a little girl. She was no more than 5 years old, and was all dressed in white, with a white hijab. She stepped in front of me, smiling like the sun, and asked me something in Arabic which I did not understand.

I realized she was a little beggar. She smiled at me again. Again, she said something in Arabic. Again, I did not understand. No matter. It was clear what she wanted. I put 50 piasters in her hand.  Half an Egyptian pound.

Western travel guides suggest: “You can leave 1 or 2 pounds as a tip to the hotel staff. As for the beggars …you should avoid them…there are a lot of them…”

No, I did not follow the instructions of the tourist guides.

Simply put, this child could not be avoided. God sent her into my path. She was happy with my small present. She was smiling. I continued toward the hotel. But I had gone no more than two steps when a small hand tugged at my jacket. This time she hailed me in English: “Sir!”

She offered me a pack of paper handkerchiefs.

“No sweetie. I do not need them,” I said, forgetting that the child did not understand English. But she continued to offer me the handkerchiefs. She said something in Arabic, which I understood to mean:“Take it! Take it!”
“No, I do not need it,” I said in English. “Go sell it elsewhere.”

But then I began to grasp the greatness of this little human being. She did not want to beg. She did not want even half a pound without work. Before me stood a little trader – a proud little merchant. A little Egyptian bee who was at work at a time when most of her peers around the world are sleeping.

She continued to offer the handkerchiefs. I finally understood the message. I took them. I did not want to hurt her. I said, “Thank you.”

I was on the verge of tears –  tears that flow from the heart. I turned around, seeking the child’s parents. I wanted to tell them: “Do you know that you are blessed with this child?” But there was nobody with her. She was alone with her handkerchiefs.

I thought of the Little Match Girl, a European fairy tale about a poor little girl who sold matches and died on the street. I prayed the Lord would be more merciful with this child.

As I stood there, the small seller held out her hand again – seeking a higher price.

Of course. She is a serious merchant. She determines the price. This is real commerce. Everything else is charity. And she does not want charity. She wants to earn money. I gave her another half pound. Done.

Giving me the most beautiful smile I received while I was in Egypt, the satisfied little girl let me loose and was gone like the wind.

In my country, I cannot buy anything for 1 Egyptian pound (0.1 Euro). Not even a package of handkerchiefs. But with one pound in Egypt, this girl can buy a loaf of bread. With one pound in her hand she will not go to sleep hungry.

I still have the handkerchiefs I bought from the little girl in Alexandria. I will keep them always. It is my most precious souvenir from the land of the Pharaohs and Mubarak’s Egypt because it reminds me that angels are all around us. We just need to look for them carefully.