Literacy: The Fatal Flaw At Heart of Saudi Academia 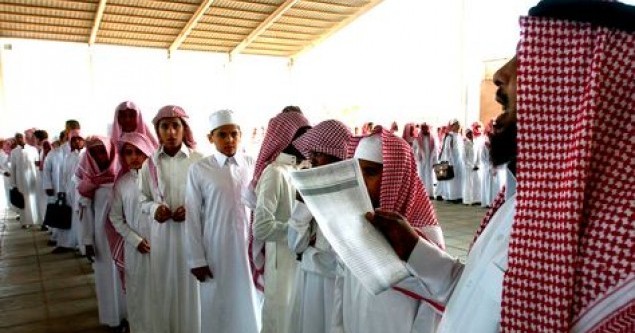 There seems to be a great deal of confusion among Saudis as to the best way to obtain analytic and critical thinking skills. Many Saudis are ‘big’ on leadership because, not being familiar with the nuts and bolts of academic disciplines not directly connected to wealth or the making thereof, they figure they can get some Syrian or Egyptian to teach them (or do) the rudiments of the rest when the need arises. Lately though, it has become painfully obvious that only being able to understand the gist of a document and the ability to read bullet points doesn’t give the degree -bearing Saudi  the academic know-how to write and publish research needed to pull Saudi universities up in the world rankings.

The Saudi quest to make English the ‘other’ national language has hit a snag. Not being a culture that has a strong literary tradition, many Saudis have failed to realize how much reading and writing develop critical and analytical thinking skills. Some educators in the kingdom are beginning to realize that doing the range of courses at Berlitz , ELS, Wall Street—and the other forms of English Language ‘training’ management at these and similar institutes  are no substitute for reading Hawthorne, Lao Tzu, Thoreau, Feud or pondering the  legacy of cause and effect illustrated through the global history of the western world, the happenstance they are so eager to join.

Preparatory year programs at the university level,  dissatisfied with the English learning management the institute systems have been peddling as avenues of academic achievement, are looking elsewhere for a quick fix, still unwilling to consider their approach to learning as a training (as opposed to a conditioning) maybe wrong. The current craze known as ‘self learning’, erroneously thought to be this expedited solution, bears partial affirmation that there has been a lack of methodology in teaching and learning in the wake of what has become a tradition of  rote learning without understanding.

A good example of this is the current focus on training students in the techniques of Academic Writing without the literacy. Reading to understand the flow of the language or the creative inspiration behind it is a necessary ingredient in fostering critical thinking. Without it, the components of creativity which have propelled the US and other western countries to the height of discovery and invention will always elude the Saudi brain trust. Learning to write in English—particular academic and expository writing, needs learners to not only understand the dynamics of spelling and grammar, but to develop a ‘feel’ for words as they are used in a variety of contexts. Unless the person wanting to learn is a professional ‘talker’ (which I suppose means salesman) in an English speaking environment, reading is essential not only in how to use English but how to truly meta-cognate (fluency without thought) the language to produce creative and meaningful communication.

Why Just learning the Mechanics of Writing Doesn’t Work

Many in the Saudi Education establishment believe the keys to intellectual progress come by way of Academic Writing. Often confused with Business Writing, Academic Writing is a scholarly discourse between people who know enough about an issue or subject to engage in an informed discussion or/and debate using sources that are or can be acknowledged by the general scholarly community as ‘credible’ (usually meaning based on established research and sources thereof).

These respected sources usually require the advent of lots of reading in a discipline (why Ph.D. candidates spend so much time doing it). There is an assumption that the reader has knowledge of the specific terminology commonly used in expert reading, writing and speaking of the subject as well as its historical contexts.

Grammar is extremely important in Academic Writing.  In most cases, it must be formal and contain no contractions, figures of speech (except for the Latin variety) or slang because terms and ideas must maintain their agreed meaning to debate in an attempt to prove or disprove their validity usually in the wake of new discoveries or/and ways of thinking in the field.  Since terms in these discussions are precisely defined, omission of a comma may confuse or make incomprehensible a point being made.

Academic papers have a formal; static structure and form and are delineated through traditional titled sections from beginning to end. Format with regard to font, line spacing and margins in this type of writing also have rigid specifications and requirements. The overriding purpose of the academic form is to give the reading the impression that the conclusions and opinions are derived as an objective consequence of the facts discussed.

Examples of this type of writing are research papers; scientific reports and quantitative analyses. The reputation of the writer is based on the honesty of his scholarship and research reported.  Staying abreast with current knowledge and discoveries requires—that’s right, reading. Academic integrity, traditionally not prized over the covert ‘help’ Saudis gives their fellow students, may also get in the way of any scholarship he may produce.

Conversely, the purpose of expository writing is to communicate, entertain and inform. The writer often assumes the reader knows nothing outside what is commonly known about the subject. The credibility of information is secondary to communication. The purpose of the author in writing the piece is to define and explain the subject in a way an ordinary person can understand. Words, phrases and grammar are often informal. The writer doesn’t approach things scientifically, but with an opinion.

Expository script is used as a medium of elucidation and has a variety informal language styles and approaches that can be conveyed through almost any ‘voice’ (for example, a jovial or judgmental tone) or arrangement of facts and/or opinion  with a  strong organizational context that attempts to teach the reader about the subject written without being directly didactic. Slang and figures of speech are encouraged to short cut the content in British English (although in American instruction of writing, it is discouraged). The writer’s reputation as a source of knowledge isn’t on the line with each statement necessarily and his credibly remains intact even if his position is flawed or riddled with half-truths (in the court of public opinion, lack of evidence is considered ‘controversial’) even in journalistic circles.

Magazine, business correspondence of various ilk, newspapers; advertisement copy and their myriad of styles are examples of this genre of writing. Such is the stuff that articles at Mideastposts are made of.

Contrary to the assumption made in academic writing that the reader is an expert or has an expert like understanding in the subject written about, expository writing assumes the reader knows nothing other than what is commonly understood about the subject of the writing. Unlike its academic version, expository grammar and language can be expressed as contemporary manifestations of tone and jargon which literally can be define through their consistency of use within a particular piece of writing.  Expository writing is meant to express ideas and communicate them to the average reader; whether factual or opinion —and may heavily rely on the devices of rhetoric to sway or convince.

The writer merely must have an opinion that is being expressed. Verifiable proofs to its veracity are inconsequential to informing or express the thought. Reading, the other end of the conduit of written communication and information exchange, is still often necessary to comprehend the importance of thoughts being expressed.  Unfortunately, just being functional in scribbling a legible opinion in this regard won’t bring home any Pulitzers, land a lucrative business deal or inspire a young Saudi to be romantically courageous over some abstract noun.

Since Expository Writing is the most common vehicle of the printed word in English speaking societies, it is usually taught first as a means of teaching the logistics of written communication because it is the most familiar form of writing encounter in daily life. The basic paragraph and essay structures parallel that of Academic Writing (cause and effect; comparison/contrast for instance). Through it has a comparative structure, Academic Writing is taught as in separate course in western schools, focusing on formal grammar, syntax, format and structure.

Must people who ‘talk’ Saudi Education consider academic writing the key to analytic and critical thinking skills but, in truth, it is important to remember that most writers learn persuasive and argumentative writing through the medium of expository expression. The best writers can use the skills required in both to ignite the imagination of their readers and educate the public in what is important while giving them a better understanding of the world around them. In English, the only way to get there is to read what others have done and acquire the mellifluous jargon of prosaic thought and articulation. Reading the writing of others and seeing how it is done is like learning to speak through listening. The brain has to see the pattern in it; understand the interplay of words others use as an indispensible part of the process of  learning correct usage.

Of course, the Saudi government may feel that having too many opinionated eggheads around could be bad for the ‘King’ business. Despite what the western media tell us, people seldom rebel because they think one form of government is better than the other unless their misery out weighs the pain of getting off their duff to do something about it.  At this juncture in Saudi Arabian history, with the sluggish rise in the cost of  living; a slowly developing but adequate infrastructure, a mounting but still manageable unemployment problem, a few well read Saudis  (factoring in the low energy nature of the average K.S.A. citizen) shouldn’t represent any sleepless nights for the current administration.

Like the adage about breaking a few eggs to make an omelet, cracking a few books (as well as writing a few) is the only avenue Saudis can take to begin producing a homegrown, resourceful intelligentsia that can truly compete with their western counterparts. Reading and writing aren’t banal tools used to transact deals in the world of global marketing, but a way to learn, participate and remain aware of the politic, social and all the other vicissitudes of life on earth that affect it.  Saudi Arabia doesn’t need more castles in the sand (that is– skyscrapers on the Corniche) but it does need to realistically nurture its own intellectual resources by overhauling its Educational system as well as create programs that inspire its youth with an intrinsic desire to learn rather than  just an extrinsic desire to earn.

One Response to Literacy: The Fatal Flaw At Heart of Saudi Academia