Lingerie in Saudi: An End to the Humiliation? 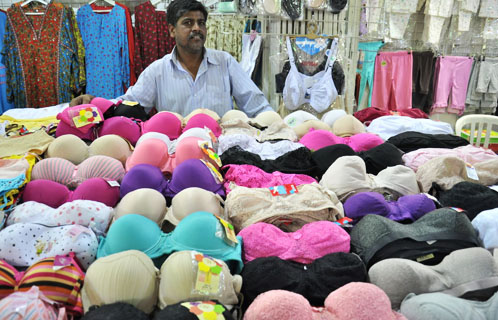 Scene from a lingerie store in Riyadh, Saudi-Arabia.

Woman enters shop fully covered in her black abaya. An Arab male salesclerk approaches with a smile while closely eying her body up and down. “Hello ma’m can I help? You need push-up bra?”

“We have new sexy panties you want to try ma’m?”

-No thank you, please leave me alone. Salesman follows her around store within close proximity of about 2 meters. Woman picks up a bra in her size. Salesman takes a long evaluating look at her breasts.“We don’t have your cup size ma’m. That is not your size.”

-I think I know my size, thank you.

Woman tries to act as disinterested as possible to make him disappear. The salesman doesn’t take the hint and continues to follow her eagerly bringing a lacy push-up bra in bright purple color for her to see. “This push-up bra is very excellent quality and we have your size ma’m”.

Woman ignores him and proceeds to cashier. There are no fitting rooms because they are banned, so she must buy the lingerie without trying them on.

“No return or exchange ma’m. Are you sure it’s your size, we also have the panties in size XL.”

Does my arse look that big in this abaya, the woman thinks to herself while at the same time feels utterly humiliated.

-This will be fine.

The woman leaves the store blushing and makes a note to self never to purchase underwear in Saudi-Arabia again. Unless it’s in the ladies only section of Kingdom shopping mall.

When will this madness and humiliation end?

Soon, if we are to believe that the Kings ruling in June earlier this year to start employing women in Saudi-Arabia’s lingerie stores will actually be implemented. According to this news article there have already been measures taken by some large lingerie chains for the switch-over to female staff. A store in the more relaxed city of Jeddah is rumored to have employed women.

Until very recently, women were banned from working in public places like grocery stores because of gender mixing issues. The women that began working at Saudi-Arabia’s Panda food chain as cashiers created an uproar of protests from the public and religious authorities. Read about some of the reactions:http://blueabaya.blogspot.com/2010/08/boycott-fatwa-madness-by-supporting.html

Currently if women in the Kingdom wish to purchase the lingerie from saleswomen and have the option of actually trying the clothing on in fitting rooms, they need to go to the female-only sections of shopping malls. It will be interesting to see if the lingerie shops will install fitting rooms along with the change to female only staff. That just might be pushing the limit though.

Closed off from public view, ladies only clothing shops have fitting rooms inside. Will the lingerie shops also be concealed like this to hide the female workers? How will men buy lingerie anymore? Will there be a guard outside to prevent men from entering? Surely there are men out there who wish to buy lingerie as gifts for their wives.

The previous minister of Labour, Dr. Al Qusaibi, issued a law back in 2006 decreeing that only women were to be employed at lingerie shops. It was never implemented because of the strong resistance from religious clerics.

A brave Saudi woman Reem Asaad has campaigned for a change to the awkward situation for many years. She reaches out for women to boycott the stores that are non-compliant to the law. She says: “The way that underwear is being sold in Saudi Arabia is simply not acceptable to any population living anywhere in the modern world” . Let alone in the world’s most conservative and private country Saudi-Arabia.

The current Labor Minister Adel Fakieh has given the lingerie stores a deadline of hiring all-female staff by the end of 2011. The  new law for women working at lingerie stores, make-up stores or other shops selling womens items has a long list of conditions making the change complicated to the employers:

-hired women must be Saudi

-security must be provided

-stores can be family section or women only

-employer must provide health coverage for female employee and all dependents

-separate toilets must be provided

That men sell lingerie in Saudi-Arabia has always raised eyebrows and caused unease in both the women buying and the men selling it. Despite the King’s ruling, the revised law and social pressure for change,  female employees have not been spotted in Saudi-Arabia’s lingerie stores, yet.

Time will tell if this time around the Saudi society is ready to have females employed in lingerie stores.