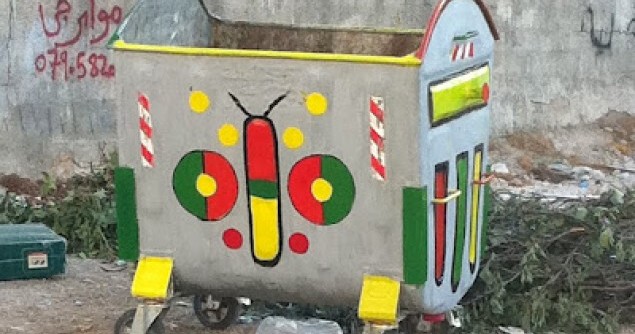 Sometimes, one thing leads to another on Facebook and we join our voices across borders in support of an idea.

This happened a couple of weeks ago through a posting on Facebook by my friend Ali Dahmash.

Ali shared a photo by I care for Jordan of a garbage skip painted by Muna Awad and her family to beautify the part of Amman where they live.

Countless comments later, I got to “meet” Muna online.

She told me, “We need to highlight issues or problems in our city by creating solutions — something like ‘lighting a candle instead of cursing the dark.’”

Muna Awad set about her solution by painting the ugly iron wheelie in the street. She told her family, “We should all care about how we pack our garbage and thrown it away and how it can be picked up in style, so to speak. It is our responsibility even in the streets.”

From the many messages tagged on the photo, we all agreed it was a trend that would help make cities look better and raise awareness to keep the streets clean, especially if the project were approved and sanctioned by municipalities.

While Muna set out to get the community involved in Amman, I started thinking it would be a great idea for Dubai as well. If the community were involved, people would maybe be more careful about how they treat trash and not just toss it out.

One of the first things that struck me about Dubai when I arrived in 2006 was the city’s cleanliness. It must be one of the cleanest cities around the world. Recently though, I noticed there was more litter, tossed out of car windows, scattered around street bins, despite innumerable garbage collectors and street cleaners, always standing out in their orange overalls, trying to keep Dubai spotless.

What if a project were launched, in coordination with Dubai Municipality, to paint all these garbage bins street by street? This could revitalize communities, counteract graffiti vandalism and engage new and established artists, local and foreign.

This could be extended to the many recycling bins littered around the city too and encourage recycling.The “garbage bin project” could be launched in schools and universities. Each one would take responsibility for the garbage bins in the streets of their area. Pupils and students would be involved and become aware of such responsibilities at a young age.

Apart from pupils and students, the idea of painting the ugly silver garbage bins could extend to galleries, restaurants and malls. Shops and businesses could participate too.

Local and foreign artists would be invited, through the municipality, to participate in beautifying the city with their art.

Could such a project be launched at Art Dubai in March 2013? Would Dubai Municipality approve?

This could all be part of a “street art” program to develop, support, promote and increase awareness to cleanliness and recycling while adding beauty and character to neighborhoods and counteracting graffiti vandalism.

By John Fekner’s definition of street art as “all art on the street that’s not graffiti,” the thousands of garbage bins on the streets of Dubai, every 50 meters in some streets, could really benefit from an overhaul and additionally encourage residents to throw their trash inside the bins, rather than around them.The “Garbage Art” I propose would be government- and/or municipality-supported and sponsored.

Imagine if the project attracted Banksy to participate?

“Garbage Art” would allow artists, amateur and professional, to reach a much broader audience than exhibiting in art shows and galleries.

Many street artists have earned international recognition and displayed their works in museums or galleries as well as on the streets. Some street artists achieve commercial success doing graphics for companies or starting their own merchandising lines. Others have transitioned away from street art to traditional gallery and museum exhibitions.

While practically all large cities in the world, and some of the bigger regional towns, host some form of urban art or graffiti, there are a few locations that are considered to harbor forerunners of particular mediums or foster a pioneering street art culture in general. Such locations often attract internationally renowned artists who travel to these locations to exhibit their works. Dubai could become one such destination.

Bristol, in the UK, is probably the best known for its share in the street art scene, due in part to the success of Banksy. London too has become one of the most pro-graffiti cities in the world. Although officially condemned and heavily enforced, street art has a huge following and in many ways is embraced by the public, for example, Stik‘s stick figures.

Imagine what fun it would be to have bus tours to view Dubai’s garbage bins.

Thanks Ali and Muna for the idea. Maybe we could twin Amman and Dubai…

So who has wasta (connections) at Dubai Municipality?

Who can get the idea to the attention of our beloved Sheikh Mo, as we affectionately refer to His Highness Sheikh Mohammed bin Rashid Al Maktoum, Vice President and Prime Minister of the UAE and Ruler of Dubai?