Let’s Hear It for the Poet with the Weird Accent 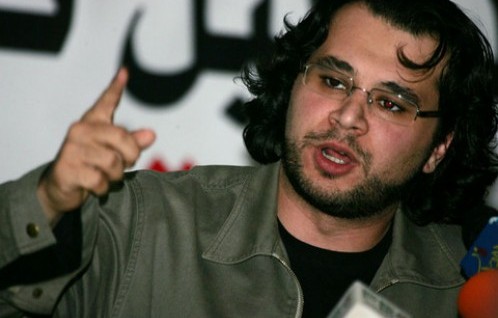 As I’m sure many of you have already heard, Egypt’s Supreme Council of the Armed Forces (SCAF)—which has found itself spinning the wheel of the nation since February–-now has literary opinions, too.

I probably missed the communique where they listed the attributes of their favorite poets. But it came through loud and clear that General Hassan al-Roweiny doesn’t like poets with “a weird accent and non-Egyptian features,” especially poets who might be (mon Dieu!) part Palestinian. Far be it for anyone with Palestinian ancestry to lecture Egypt on national security, because:

With its population of 86 million, Egypt isn’t waiting for a Palestinian to develop state policies. It’s Egypt that has been working on the reconciliation between Palestinian factions. (Trans. Al Masry Al Youm)

Never mind that this particular poet, Tamim al-Barghouti, has a PhD in political science and has published a book on political theory.

And never mind that Tamim al-Barghouti is the era’s crown Prince of Poets. Although he did not officially win the “Prince of Poets” contest (commentary on why that might have been), he is in any case a powerful poet and the son of an acclaimed literary duo: Egyptian novelist Radwa Ashour and Palestinian poet Mourid Barghouti.

The three of them don’t just form the most talented Arabic-writing literary family around: They are thoughtful social and political commentators, too.

For a glimpse at their sensitive, incisive commentary—which can be read aloud! with a weird accent!—I suggest you pick up Radwa Ashour’s novel Specters and Mourid Barghouti’s memoir I Saw Ramallah this summer, and then Barghouti’s I Was Born Here, I Was Born There (trans. Humphrey Davies) when it comes out in English this fall.

No need to mention that Egypt needs insightful, talented, weird-accented people now more than ever.