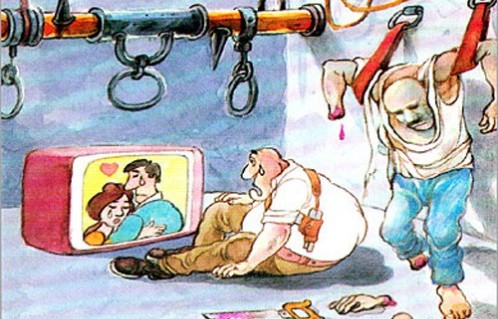 Beirut39-winning novelist Samar Yazbek was detained and beaten. Syrian songwriter Ibrahim al-Qashoush, author of a popular anti-regime song, was murdered, his vocal cords apparently ripped from his throat. And this Thursday, political cartoonist Ali Farzat, Damascus’s “Pen of Steel,” has had his head, arms, and hands severely beaten.

In a 2005 interview, two years after Farzat was forced to shut down his independent paper—the first under Assad—he told interviewer Scott Davis, in response to a question about whether he continued to publish at home and abroad:

“Yes of course I am because my drawings are not anchored to a certain place and time, although they spring from local concerns and pains. But they are part of a comprehensive human art that touches the feelings of people all over the world. The works of the artist Mr. Charlie Chaplin are a clear example of what I mean.”

Farzat described his favorite target as “this whole world with its contradictions” and said that he doesn’t use text, in general, because: “A comment would push the picture in the frame of local understanding of the language. Hence, my pictures aim their criticism at the practices without any written language, this makes them a humane art talking in all languages.”

In both the interview with Davis and another with Sabah Hawasli, the specter of Palestinian cartoonist Naji al-Ali’s assassination was raised. Certainly, Farzat was aware of the danger.

You can buy a collection of his work from Cune Press. And much more at Farzat’s official website.