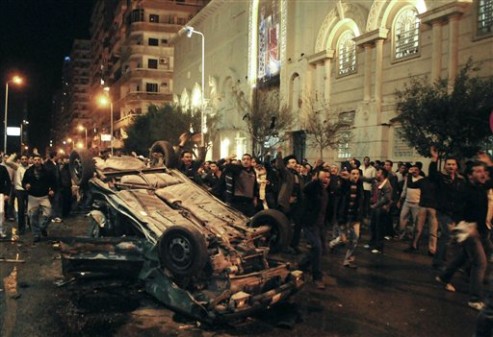 Galal Amin, Youssef Ziedan, and Alaa al-Aswany are a few of the big names who have been out and about in bookstores this January, talking about their books (of course), as well as about tensions that led to the New Year’s Eve bombing of an Alexandria church.

No literary events have been canceled by the government, perhaps demonstrating that there is something wrong with our literary events. Last night’s solidarity concert in Alexandria was canceled at the last moment, with the government citing “security concerns.” The same reason was given for canceling an anti-sectarian family day at Al Azhar Park this past summer.

Of course, all of the above-mentioned authors have condemned the bombing.

Dr. Ziedan, author of the International Prize for Arabic Fiction-winning Azazel as well as the bestselling Arab Theology and a third bestselling novel, The Nabataean, traced the issue of sectarian violence back to the July 1952 revolution, which—he said—started the process of highlighting political and social divisions, leading gradually to tensions between Muslim and Christian communities. He denied that Azazel, which has been controversial in the Coptic community for its portrayal of Christian history, had instigated any sectarian strife.

He also reportedly criticized the Catholic pope for “interfering” in Egypt’s affairs by condemning the bombing.

Alaa Al Aswany, according to Youm7, blamed the bombings, in part, on the spread of Salafi ideology through satellite channels. At his talk at Shorouk, he called the bombing the worst crime in the history of modern Egypt. Al Aswany also spoke about his new book, a collection of his newspaper columns titled Egypt on the Reserve Bench.

But it was the author Khaled al-Khamissi—who wrote the best-selling Taxi and another novel titled Noah’s Ark—who was the canary in the coal mine. According to Al Masry Al Youm, he read from a list of persecutions and injustices enacted against Copts throughout Egyptian history, saying: “We must acknowledge that there’s a real problem. Intolerance is only rising.”