Laughter: Is it Really the Best Medicine? 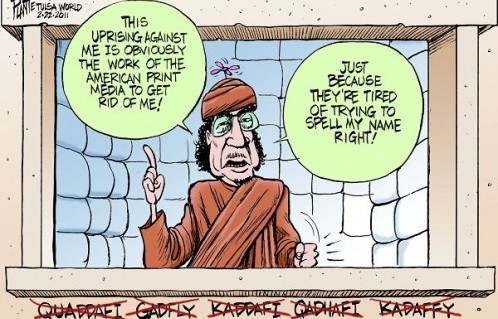 It seems the world around us has had nothing to offer recently but horror and torment. How is it possible to remain cheery in the face of all this disaster?

The Middle East’s new year was filled with excitement, triggered by relatively peaceful revolutions in Tunisia and Egypt. But recent, more violent, events in Libya, Bahrain, Yemen and now Syria have cast a darker shadow across the hopes of millions for reform in their countries.

On the other side of the world, Japan has been suffering the effects of a huge earthquake followed by a tsunami, and now the subsequent troubles with a nuclear plant.

It feels inappropriate to smile, yet alone search for humour while millions continue to suffer under natural or man-made tragedies. And yet, strange creatures that human beings are, we still have the urge to look for humour even in the worst of times.

Incompetence is a traditionally rich seam for jokes. Consider this error committed on Fox News during the Japan disaster. The broadcaster displayed a map identifying all the nuclear plants in Japan, including one named “Shibuyaeggman“. On later inspection it turned out that “eggman” was in fact not a nuclear plant, but a nightclub in the Shibuya district.

“Comedy” goes the famous saying, “is simply tragedy plus time.” And when you don’t have time, then distance can do the job just as well.

There’s a cartoon depicting the floods in New Orleans in 2005. A man is shown at a police station describing how his house was swept away by the water, down a hill and washed into the ocean. The policeman responds: “OK, I’ll just put ‘no fixed address’.” It feels very close to the recent events in Japan. Is it funny? I’ll let you decide.

Laughing at another person’s tragedy can be considered tasteless, but for those in the middle of the particular situation it is a way of releasing overwhelming tension.

One Bahraini activist chuckled at her own plight on Twitter. In regards to the drama involved in the protests, she tweeted: “Being followed by many eggs … I can make u all a Mexican omelette.”

Humour isn’t just about releasing tension. For those involved in trying to bring about regime change, it can be a powerful weapon.

The Nazis knew this. Joke-telling was illegal and punishable by death. As one Nazi prosecutor of the time said: “The better the joke, the more dangerous its effect, therefore, the greater punishment.”

The Libyans are aware of the political power, as well as the cathartic energy, of jokes. According to a Reuters report, eastern Libya is running wild with anti-Qaddafi humour. Graffiti on walls show him as a “Super Thief” in a Superman costume with a dollar sign instead of an “S” on his chest. Another shows him in a dustbin labelled “history”.

Mockery signals the end for an unwanted leader, and no mockery is as fine as that which points to the subtle symptoms of hubris. In Muammar Qaddafi’s case, his crazy hair is the ultimate target for satire. One cartoon urged him to “surrender himself to the ‘national council of hairdressers’.”