Laughter and Anger: In the Court of Al Aswany 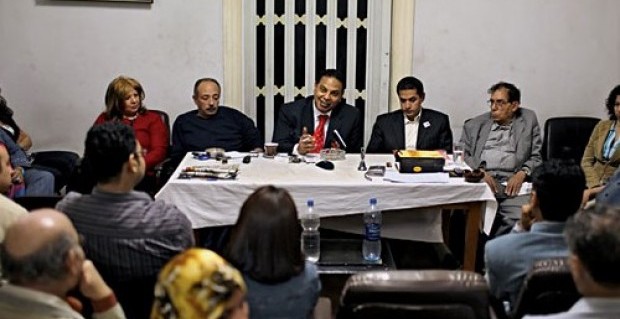 The walls of the cultural center’s main auditorium were lined with amateur paintings, drawings, and photographs. Most celebrated the revolution with the usual crowds and flags, while a few caricatured Mubarak and the military council with oversized heads and fleshy wrinkles.

The audience gathered in hundreds of chairs placed between the pictures and a few banners for Coca Cola and Vodaphone. What sounded oddly like American Christian praise music served as warm up while smartly dressed young men and women overflowed to several hundred. The curtain rose and I craned my neck to see the stage, trying to avoid falling backward into a pastel rendering of security troops kicking and dragging the now iconic woman in the blue bra.

Alaa Al Aswany, the author of novels The Yacoubian Building and Chicago, is one of Egypt’s best-known public intellectuals. He is treated in the press as the literary laureate of the Arab Spring, and Western articles about him inevitably focus on the same catchy details: that he still practices dentistry, that he has no political ambitions, that he was almost killed. It is unclear how many Egyptians have read his books, but nearly everyone mentions this one time when hetrounced the Prime Minister on television, leading to his resignation a few days later.

Over the last year, Al Aswany has held weekly salons that have grown in attendance from a dozen to hundreds. The evening I attended last week, a screen of canvas barely protected the auditorium from the Nile’s drafts, so everyone had a cup of tea, coffee, and homos, chickpeas in hot tomato broth and lemon juice. According to the New Yorker’s Wendell Steavenson, Al Aswany usually begins these salons with the national anthem and a moment of silence for recent martyrs. He speaks unscripted, pausing only to accept a cup of tea or light a cigarette. In the past, he might talk literature and maybe introduce a new author. Recently, talk is always of politics.

After the curtain rose a half hour late, Al Aswany did not stop for tea or for a cigarette, and engaged in no fanfare. He wore a simple black suit, and two colleagues joined him at the unvarnished wooden dais to sort little slips of paper with questions from the audience. At any minute, he joked, state security could come in here and break up this salon. The audience laughed, but not too confidently.

The revolution for which Al Aswany is so often seen as a spokesman is now in need of more explicit guidance. A parliament is meeting regularly, meaning that action on the streets is no longer the only political story of the day. The tragedy in Port Said last week brought as much hand wringing as it did foot marches. Activists were closing in on the end of the anniversary of the eighteen days of 2011 that brought down Mubarak. They were calling for a general strike to demand that the military council leave power. The Muslim Brotherhood, which holds a majority of parliament and therefore the biggest stake in “official” politics, called upon Egyptians to go to work as normal.

Al Aswany narrated the last year briskly. He had been optimistic that the military council would oversee a transition to civilian rule, but their continuing authority is not constitutionally or legally acceptable. The “revolution,” a big and imprecise but very nostalgic term these days, should be the only source of what is and is not legitimate.

He darted between narration, education, and opinion. He described in pedantic, but not patronizing terms, the meaning of a general strike. “It is a tool,” he explained, “to put pressure on the government to meet your demands…But it must be peaceful…The power of this revolution was that even though people were killed, we were still peaceful.”

He went for the Muslim Brotherhood, explaining that when a new constitution is written (by a committee appointed by a Brotherhood-dominated parliament), the Egyptian people have a choice whether or not to approve it in a referendum. “You don’t have to do it,” he said. “They might tell you that if you don’t approve it then men will get married but that is not true.” The audience giggled quietly.

Al Aswany’s skill is in finding broad themes in fleeting moments. He is a novelist first and a political commentator second, but the rough stones he plucks from real life sound like a planned farce as he assembles them. It’s as if Egypt is caught in a bad political satire. The day before, parliament had received the Minister of the Interior in order to discuss security and the government’s response to protesters. Later that day, a Salafi member of parliament stood up and beganreciting the call to prayer to stop the discussion. An Egyptian friend had been frustrated that the Western press saw this as evidence of a radical Islamist takeover. “Really, we all just thought it was funny and ridiculous,” she told me.

Al Aswany also saw the humor. “This man recited it a half hour late anyway,” he chuckled. “But anyway, real and true Islam is not standing up for the call to prayer. Rather, it is refusing to clap for the Interior Minister, who is killing protesters every day.”

Like many Egyptian public speakers, Al Aswany uses his hands a lot when he speaks, waving them to accentuate a point, motioning towards his chest when he says “in my opinion,” and counting on his fingers when an idea has several prongs. Unlike many Egyptian speakers, he has this one gesture where he places his elbow on the dais and splays his fingers to receive his tilted forehead. It is this pose that is pictured on the cover of his recent book of political commentary in Arabic, and it makes Al Aswany seem as though he is both thinking coolly and simmering with anger at the same time.

At one point, a woman ten rows from the front started shouting at Al Aswany, cursing him and telling him to leave. He could not hear what she was saying from the stage but sat calmly. Then, he smiled, and declared “iglis, iglis!” which means “be seated!” but is only used in parliament. This received more laughs and applause and the lone woman stormed out. Earlier Al Aswany had read a question printed on a card handed up to the front. The anonymous writer accused him of being “one-sided” and against Islam. Al Aswany, exasperated, answered him as he had the woman: “You did not listen to anything I said!”

He accused the judiciary of not being truly independent. He accused tea vendors in Tahrir square of being government informers. He accused the police of staging PR performances more than protecting Egyptians. He accused the army of wanting to make Egyptians miss Mubarak’s rule and hate the revolutionaries. He accused the state media of campaigning to smear the protest movements. “They say these groups are foreign funded,” he told the audience, “but they would not have revolted if they had money!”

“They tell us to calm down,” he said, his voice rising on “tell us” and falling to lengthen sarcastically the word “calm.” Then sliding back up to a punching cadence: “No revolution should ‘calm down’ before it has realized its goals!”

Note: Quotes are courtesy of spur-of-the-moment translations by a friend of Chammah’s, as well as his own understanding, so are not likely literal.

Maurice Chammah  is a writer, currently a Fulbright Fellow in Egypt, a follower of Egyptian media, and a reporter on culture and politics. he wrote a review of Al Aswany’s most recent publication in English, a collection of newspaper columns from before the revolution. You can read it here. This write-up originally appeared on Chammah’s own blog, Adrift on the Nile.