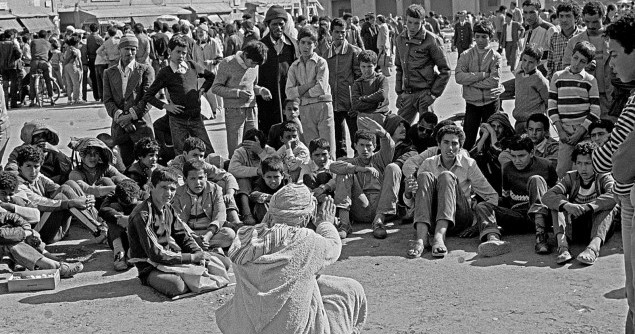 Back in 2011, The View from Fez reviewed Richard Hamilton’s book of stories from the few remaining storytellers in Marrakech (see our review here). Our regular contributor Derek Workman reports that there is now only a single storyteller left in the Jmaa el Fna

When you walk through Jmaa el Fna on a regular basis you become accustomed to all the performers that give the square such a lively and special feeling; the snake charmers, gnawa musicians, the water carriers and girly-boy dancers who flash their eyes at you from behind tasselled scarves. At one time you could have included storytellers in that list, but, almost unacknowledged, they are dying out, and it seems that there is only one traditional storyteller left in la Place, and he doesn’t perform on a regular basis now.

I was at a book reading recently of The Last Storytellers by Richard Hamilton, and it saddened me to hear that without realising it Marrakech has all but lost a tradition going back almost a thousand years. And unfortunately, in these days of TV, DVD and pirate videos, once it’s gone we’ll never get it back.

Richard has worked with the BBC World Service as a broadcast journalist for fifteen years, and spent a year in Rabbat as their Moroccan correspondent. While he was there he travelled regularly to Marrakech and became so intrigued by the storytellers in Jmaa el Fna that he suggested to the BBC he did a programme on them. It was while he was recording the programme that he realised that within a very short space of time there would be no-one left to entertain the audiences with their fanciful tales. He kept returning to Marrakech over the next couple of years, searching in the Medina for the old storytellers, who were mostly dead or retired by then, so he could record their stories before they were lost for ever. The result was The Last Storytellers – Tales From the Heart of Morocco.

“Marrakech is the heart and lifeblood of Morocco’s storytelling tradition, and there have been storytellers gathering their audiences there for almost a thousand years. The stories from Marrakech are particularly rich because they are influenced by traditional Arabic stories from the Middle East, then there’s the Berber civilisation that has filtered down to these stories, and some of them have influences from sub-Saharan Africa, so I think that’s probably what makes them so rich.”

These tales would once have had a huge educational, religious and moral impact on their audiences, and they can often be understood on varying levels, but as much as anything they gave the listener a short break from the realities of life.

“These are really morality tales in which the underdog, the poor, the down-trodden beggar, succeeds against the evil, rich, scheming sultan, vizier or corrupt judge, and that was very important for the original audiences of these stories because they would be poor themselves, and in their own lives they wouldn’t have had any success or power or status. So I think that was their form of escapism, a bit like modern-day cinema where people go to dream, and this is what people gathered around a storyteller for.”

Unfortunately, we’re never going to be able hear the stories Richard Hamilton gathered from the storyteller’s mouth, but you can enjoy a wonderful selection of Moroccan fables in The Last Storytellers. Richard has kindly given us permission to re-print one of his tales.

The Birth of the Sahara as told by Ahmed Temiicha

A long time ago, when the earth was very young, it was one huge garden covered in tall palm trees and perfumed jasmine, and the songs of nightingales flooded the landscape with their gently melodies. At this time, all men were loyal, trustworthy and honest. In fact, the word ‘lie’ did not even exist.

But one day, someone told a lie. It was a very small lie and of no importance, but it was the end of man’s childhood and the age of innocence.

So God summoned all the men on earth together and said to them, ‘Each time one of you lies, I shall throw a grain of sand onto the earth.’

The men looked at each other, shrugged their shoulders and said to themselves, ‘A grain of sand? What difference will that make? You can hardly see a grain of sand.’

And so lie after lie, little by little, the Sahara gradually came into existence, as God threw grains of sand onto the earth from the heavens above. But here and there the odd oasis can still be seen. These are the traces of the original garden, because not all men lie.