Keeping the Meaning in the Language of Protests 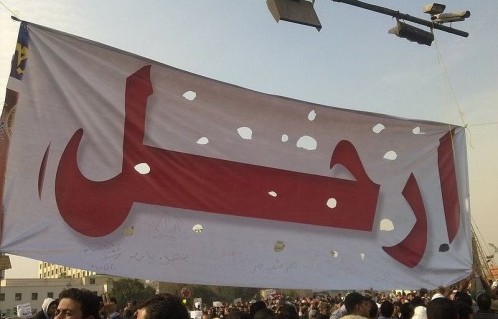 The chants, slogans, and signs of the 2011 Egyptian revolution have been fodder for translation (and translation theorists) since the first protests on January 25.

In late January, Elliott Colla wrote an essay about the use of protest chants—and the difficulties in translating them—for Jadaliyya. This linguistic challenge is also part of the coursework of a new spring class at the American University in Cairo, Dr. Samia Mehrez’s “Translating the Revolution.” And the protest signs in particular are the subject of a forthcoming book, Messages from Tahrir: Signs from the Egyptian Revolution.

Colla addressed the difficulty of translating chants for a foreign audience, noting that, “The poetry of this revolt is not reducible to a text that can be read and translated in words, for it is also an act in and of itself.”

The forthcoming Messages from Tahrir, edited by Karima Khalil, preserves some of this performity, as it is primarily a collection of photographs. Still, the network of meanings and the “aliveness” of the signs are difficult to capture in such limited spaces.

The literal translation of “my blood is on your neck” does take the reader outside his comfort zone, evoking a space and context beyond the words on the sign. While it may take a little decoding—since the expression in English is slightly different—the new body part (neck instead of hands) enlivens the English language and makes us think about responsibility in a different way. However, it also moves away from the directness of the sign, which does not have this linguistic “strangeness” in Arabic.

A direct translation also has the unfortunate consequence of, for some readers, exoticizing the Egyptian struggle.

When author Ahdaf Soueif translated Egyptian protest chants for The Guardian in 2005, she also abandoned this sort of local flavor in favor of a British-English colloquialism. Fuul, bey, and even lentils disappear:

“A soldier gets a lousy deal/rotten clothes, one lousy meal”

“Hey Suzanne tell the lord: even beans we can’t afford”

Indeed, for Khalil’s book, she said, “I was most concerned with approximating their meaning and general spirit and in keeping the tone of the book quite colloquial.”

A recent blog post from Dr. Mehrez’s course looks at a few chants in-depth, working at the exceptionally difficult task of preserving (some of) their rhythm and meaning in very tiny spaces.