Kansas Spooked By Sharia: ‘The Ayatollahs Are Comin” 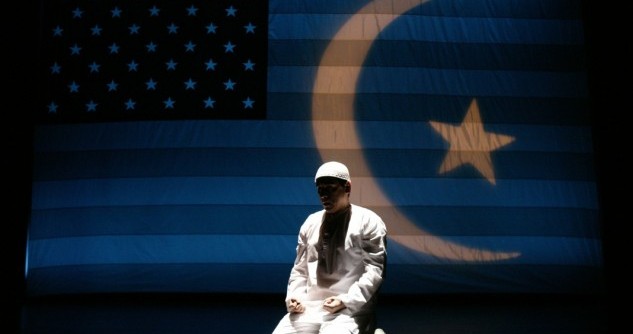 A few months ago, before Big Bird got his “laid off” notice from Mitt Romney, the state of Kansas passed a law “to prevent Kansas courts or government agencies from making decisions based on Islamic or other foreign legal codes.” This passed by 33-3 in the Kansas senate and 120-0 in the Kansas House. Despite the fact that there is no indication that anyone ever tried to use Islamic sharia or any other “foreign” legal system to thwart existing law in Kansas, the legislators thought it prudent just in case.

Perhaps the Kansas politicians think that after Iran’s Ahmadinejad spoke (and spooked, of course) at the United Nations in liberal New York City that he might turn himself into the Wicked Witch of the East and start chopping hands of thieves and stoning men and women who engage in adultery (which does not appear to have reached epidemic proportions yet in Kansas but could if more Democrats are elected). Of course, this is not about hating Islam (a religion that in some respects can look a like that of the God-fearing Mormons not far away in Utah), but to protect the women of Kansas. As Republican State Senator Susan Wagle expressed it,

“In this great country of ours and in the state of Kansas, women have equal rights,” Wagle said during the Senate’s debate. “They stone women to death in countries that have Shariah law.”

Apart from the fact that the vast majority of countries that use Islamic law do not in fact stone anyone for adultery, you never know who might cast the first stone in a state like Kansas. It is obviously important to protect the women of Kansas from being stoned to death for fooling around, but it is not important to let her have the choice to bring or not to bring a child of forced rape into this world.

The Tea Party drunk Republicans across America are convinced that our Christian country is being taken over by Muslims. After all, the President must really be a stealth Muslim who is sympathetic to terrorists who kill our ambassadors (as Romney asserted after the attack on our consulate in Libya) like all those foreigners who were born in Kenya or wherever. Just a couple of months ago 17% of registered voters said Obama was a Muslim and another 31% said they didn’t know if he was a Muslim or not (Gee, where is Reverend Wright when you need him?). Some 34% of conservative Republicans are sure he is Muslim, which is perhaps a liberal shift for a crowd that overwhelmingly think we all come from Adam and Eve some 6,000 biblical years ago.

So is there really a cohort of stealth Muslims trying to take over America the way the Commies tried to do before Ronald Reagan slapped them down? If Obama really is a Muslim, then having Osama killed is the perfect ruse to fool Americans. It should be obvious that something very strange is going on as we near the apocalypse. Most of those signs of the last days in the Book of Revelation have already occurred or are at least projected in Obama’s current budget. The horsemen of the Apocalypse are at the gates and they are riding Arabian steeds that race in high-stakes derbies in Dubai and Qatar. The clues are there for those who want to find them. Isn’t it a coincidence that Obama (now that is certainly not an American name, is it?) rhymes with Osama? Not at all, and all those sharia-sipping liberals in the deep Blue states can’t wait to carry out Lucifer’s marching orders. The Democrats won’t ante up to the fact (and we don’t need no fact checkers to judge us) that electing Obama for a second term will give the Antichrist full reign with Big Bird (clearly the Devil in disguise indoctrinating our kids with Muslim ideas) probably the next ambassador to the United Nations (which are scheduled to include Gog and Magog in the next General Assembly).

The scenario just etch-a-sketched above is not much of a stretch from the actions of the Kansas legislature, but an argument can be made that the Ayatollahs are indeed here already. Take Todd Aiken, whose claim that a woman legitimately raped has a God-given biological mechanism to keep from getting pregnant. Sounds just like something I would expect from an Ayatollah. The Ayatollahs certainly don’t cotton to evolution or modern science. Then there isRepublican Congressman Paul Broun of Georgia who said last week that evolution and the big bang theory are “lies straight from the pit of Hell.” Add to this Justice Scalia, speaking at the American Enterprise Institute and saying: “The death penalty? Give me a break. It’s easy. Abortion? Absolutely easy. Nobody ever thought the Constitution prevented restrictions on abortion. Homosexual sodomy? Come on. For 200 years, it was criminal in every state.” Sounds like Islamic penal law to me. And Islamic law stretches back even further than 200 years. Both Islamic law and our founding fathers did not see fit to exclude slavery from the law of the land. But the cake (and let’s hope he eats every crumb of it in the upcoming election) goes to the State House Representative from Arkansas, Jon Hubbard, who wrote in a not-so-best-selling book:

“… the institution of slavery that the black race has long believed to be an abomination upon its people may actually have been a blessing in disguise. The blacks who could endure those conditions and circumstances would someday be rewarded with citizenship in the greatest nation ever established upon the face of the Earth.” (Pages 183-89)

Yeah, listen to this privileged white guy telling blacks to thank their lucky stars and the slavemasters who dragged them from their African roots into dingy ship holds, gave them just enough bread and water to survive the trip to “the land of the free” and got a job picking cotton and a roof, even if it had a few leaks) over their heads. Some of the prettier black slaves even had the honor of having their honor taken by wealthy plantation owners, including President Thomas Jefferson. So Representative Hubbard is well aware that the traffic of slaves as illegal immigrants is really the very first “Dream Act.” What a blessing. Let the white-washed God and not-so-Jewish-looking Jesus be praised and the “niggers” dance and shout hallelujah down there in Georgia.

Yes, Kansas (and Virginia, too), the Ayatollahs are here in America. Some are already in power and others want you (if you are not part of the irresponsible 47%) to vote for Mitt and the whole line-up of “con”servatives. Make America free from sharia; support a Mormon and send the Muslim back to Kenya where he was born. Amen.