Jerusalem – The Biography: A Compelling Story 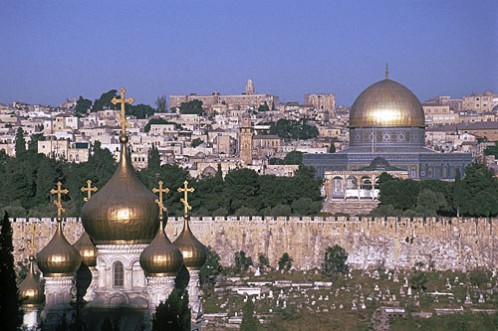 The trouble with history is that there’s too much of it. More than most of us can comprehend in a dozen lifetimes. The more you discover, the more there is to discover.

History comes in all shapes and sizes. Fat chunks of narrative and analysis about short periods of time – Tudor England, the American Civil War or the Spanish Inquisition, for example. Or journeys through centuries and even millennia. Gibbon’s Decline and Fall of the Roman Empire, for example. John Julius Norwich’s history of Byzantium. Winston Churchill’s History of the English Speaking Peoples.

Both fat slices and sweeping narratives give us problems if we are to draw meaningful lessons from them. Historians who delve deeply into a specific period risk leading us to conclusions that are light on context. And those who present us with the grand sweep of history give us big pictures, but often fail to provide us with evidence that allows us to draw our own conclusions.

At school in England, most of us were given the grand sweep. We learned about the history of our own country from the Roman occupation onwards. We learned about kings and queens, generals and wars, winners and losers. And as we progressed towards the present, we learned enough about the social history of Britain to understand the reasons for the wars, the social developments, and how Great Britain moved from being an agricultural economy to the industrial power and empire that reached its peak fifty years before I was born.

All the other history I learned was by choice rather than compulsion. As a classicist, my focus was inevitably drawn towards the Middle East. First, the Greeks, the Romans, the Persians and the Carthaginians. And as time went on, the Byzantines, the Parthians, the Huns, the Arabs, the Mongols and the Turks.

And the more I read, the less I knew. But the central reference point in so much of the history of the region was always one city. Not Cairo, not Constantinople, not Baghdad.

Jerusalem. A city I have never visited, yet a name that is ingrained both in Western and Middle Eastern culture. I grew up learning about Jerusalem, from the bible, from teachers and from a hundred church sermons. I listened to religious music in which Jerusalem was the dramatic centrepiece. Works by Bach, Handel and Vivaldi. And as I learned more about the city’s history, it seemed that even where events passed it by – during times when the city was a ruined backwater in a province of an empire – it had its own gravity that slowly drew back the attention of the world.

A few years ago, I was talking to an American colleague in Riyadh about the Arab-Israeli conflict. I quickly discovered that, like many of his fellow citizens, his understanding of the origins of the conflict was, to say the least, sketchy. So rather smugly, I took him through the Balfour declaration, the Jewish immigration of the 20th Century and the dispossession of large number of Palestinian Arabs of what they considered to be their birth right. Smug because I believed that my knowledge was superior to his.

But over the past couple of months I have been reading Jerusalem – The Biography, a history of the city by Simon Sebag Montefiore. And I have come to realise how arrogant I was in believing that my meagre knowledge gave me some kind of intellectual ascendancy over my colleague.

On the back of the cover is a statement that “The Story of Jerusalem is the Story of the World”. Perhaps the Indians and Chinese might beg to differ, but for a number of different reasons you will have no difficulty in finding Jews, Christians and Muslims who would agree with the sentiment.

The book begins with a tiny Canaanite settlement first evidenced around 2000BC. It traces the city’s development as King David’s capital, the location of Solomon’s Temple, of Herod’s Temple and the cycle of destruction and resurgence that culminated in the destruction of the city by the Roman general – later to become emperor – Titus in 70AD. Settlement, enslavement, dispersal, return, and finally the diaspora that scattered the Jews to the ends of the known earth.

After a fallow period and the rebuilding of a model Roman city on its ancient foundations by the Emperor Hadrian, Jerusalem found itself again as the spiritual home first of the newly converted Christian Roman Empire. And soon after  – bowing in ascendancy only to Makkah and Madina – as a sacred city for the new Muslim empire founded by the successors of the Prophet Mohammed. All the while, Jews around the world wept for the loss of the Holy of Holies and yearned for their return.

The narrative then takes us through periods of Christian, Muslim and Jewish ascendancy. Episodes of cohabitation and mutual respect between the faiths, vicious infighting within faiths, particularly among Christian claimants to the Church of the Holy Sepulchre. The Byzantine emperors, the Abbasid and  Fatimid caliphs, the Crusader kings, the Mamluk sultans, the Ottoman caliphs, the British, the Hashemite kings and finally the triumphant State of Israel all held sway of the city in the two thousand years since the destruction of Herod’s city. All created, and all destroyed.

It is hard to find heroes in Sebag Montefiore’s book. He portrays Jerusalem’s protagonists as creature of their times. Cruel, venal, corrupt, ambitious and treacherous, yet often high-minded and courageous. Characters with qualities we might admire, such as Saladin, – a man willing to stop the cycle of slaughter that began in the first Crusade, yet at the same time prepared to behead and crucify those who breached his personal moral code. And many others of all faiths with seemingly no redeeming qualities whatsoever.

In fact the endless cycle of destruction and violence led me to wish in a way that Hadrian had never resurrected the city, and that it had suffered the fate of ancient Carthage – its vineyards sown with salt, and fields  of broken pottery as the only physical evidence of a once-great civilisation.

It seems that throughout its history, the rulers and inhabitants of the city were unworthy of a place held holy by so many faiths. So many potentates wanted a piece of Jerusalem, and ended up degraded by their ownership – even to the present day. Almost as though their God was punishing them for their sacrilegious ambition.

Better surely that Jerusalem had remained a city of the mind. An ethereal entity to be formed to their spiritual requirements by the faiths that hold it holy, rather than a piece of blood-stained real estate that serves as a magnet for fanatics who accept no creed other than their own as a legitimate path to God, and seem intent on hastening the arrival of their version of Armageddon.

The sad aspect of Jerusalem’s recent history is that the present impasse – if Sebag Montefiore is to be believed – could have been avoided on a number of occasions by accommodations that were widely seen as acceptable and yet were rejected by the power brokers of the time. From the end of the First World War onwards, intractable leaders on both sides  – Zionists and Palestinian Arabs – declined political solutions that could have spared much of the blood that was shed during the past century and is still being shed today.

At the same time, the book leaves me wanting more than ever to visit Jerusalem, even though on one level I expect to be shocked and disappointed, like so many visitors before me. But how could one visit Rome and Istanbul, and not Jerusalem?

Jerusalem – The Biography is compelling and scholarly work by an author whose own Jewish antecedents have not stopped him from delivering an even-handed account of the city’s four thousand year history. Just as Peter Ackroyd’s London – a Biography, illuminated my capital city, so Sebag Montefiore’s book has added immensely to my patchwork understanding of the Middle East.