Jeddah: The Sculptural Capital of the Arab World 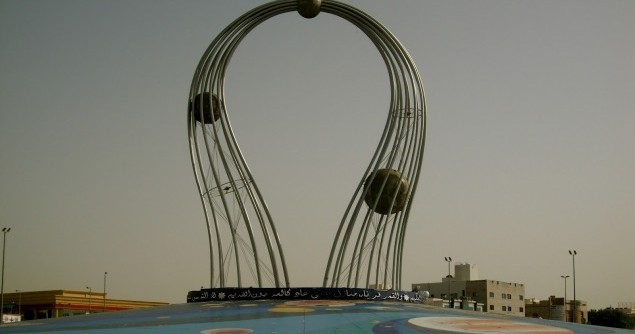 At first glance, Jeddah, Saudi Arabia, may seem like just another hot and dusty concrete metropolis in the Middle East. But less than a century ago, Jeddah was a sleepy fishing village completely enclosed by high walls and gates that were locked at night to protect its citizens from marauders.

All that changed with the discovery of oil in 1938, transforming Jeddah into the region’s busiest commerce center and the gateway for two of Islam’s holiest cities, Mecca and Medina. With the city’s phenomenal growth spurt over the ensuing decades, its cumbersome walls came tumbling down, making way for dozens of copper and blue-glass skyscrapers that wind along boulevards bursting with dazzling fuchsia bougainvillea and ablaze with red and yellow bird of paradise bushes.

But what makes the streets of Jeddah a distinctive standout is the public artwork. In the 1970s, Jeddah’s mayor, Mohammed Said Farsi, envisioned a city on par with other global cultural hubs and undertook the Jeddah Beautification Project. Part of this project involved sprinkling the city’s landscape with an array of visual sculptural treats.

The first sculptures to crop up around the city were inspired by traditional and familiar ordinary objects, such as Arabian coffee pots, water vessels and incense burners. The next wave of sculptures was developed from Quranic verses using artistic Arabic calligraphy. From that point, the influences diversified and snowballed; great care was taken, however, to avoid using the human form, to sidestep religious conflicts.

With an initial budget of US$150 million to acquire sculptures and necessary landscaping, Farsi and his team sought out local and regional artisans as well as some of the world’s most distinguished masters to create Jeddah’s works.

Henry Moore, the famed British sculptor, created several bronze pieces. Ottmar Hollmann, a German sculptor, is credited with creating more than a dozen, including the Cosmos, which soars a jaw-dropping 36 meters (more than 118 feet) into the sky, making it one of the planet’s biggest sculptures. Victor Vasarely, the French artist famous for his geometric abstract optical illusions, produced several now-priceless masterpieces.

Newcomers to the city are awed by the sheer number and immense size of these world-class sculptures, and residents are indulged daily with a feast for the eyes. The art is categorized into a variety of intentional themes, such as religious, historical, whimsical, geometrical, science and so on. The sculptures are fashioned out of everything from bronze and steel, to marble, concrete and local stone, and even scrap iron and recycled machinery.

Many of the municipality’s estimated 350 sculptures are easily accessible, whether they stand in center islands dividing the roadways, in the middle of huge traffic circles, or in the world’s largest public open-air art museum, Al Hamra.

While driving on Corniche Road, along the Red Sea coastline, visitors to Jeddah may chuckle upon seeing The Accident: five automobiles that appear to have randomly crashed into an enormous chunk of concrete. Just down the road in a lagoon appears the graceful, 3.6-meter-tall Sunflower Fountain by Finnish artist Eila Hiltunen — one of only two women commissioned for the Jeddah Beautification Project.

Among the best-known sculptures is the Bicycle. At an astonishing 15-meters high, it also has the distinction of being the world’s largest bike. Fashioned of rusty scrap metals by Spanish artist Julio Lafuente, the Bicycle occupies one of Jeddah’s busiest intersections and is accompanied by a spare wheel. Another favorite is Lafuente’s Illuminated Globe. With a surface area of 600 square meters, the globe’s specially constructed steel frame had to allow for heat expansion in Jeddah’s blistering summer temperatures.

Unfortunately, years of neglect, graffiti, indifference and vandalism have all taken their toll. Compounded by exposure to Jeddah’s intolerable heat, stinging winds, inescapable sandstorms and salty sea air, more than 125 of the original 526 sculptures have been lost to the elements. Well-meaning attempts to fix some of the broken or damaged works were crude patchwork at best.

The Jeddah Restoration Project is now underway to restore, repair and reposition many of these marvelous but weather-beaten masterpieces. Restoration funds are being raised through private donations and corporate sponsors.

“We were obliged to ship three of the sculptures to the United Kingdom because of the extensive damage they sustained over the years,” says the Jeddah businessman heading up the project, Mr. Fady Jameel, whose family has been a generous arts supporter for decades.

Jeddah’s public art is finally receiving a much-needed facelift, sure to provide its residents with many more years of enjoyment, cultural enlightenment and art appreciation that is unique to this once- sleepy fishing village on the Red Sea.