It’s Wedding Season in Saudi: So What Happens? 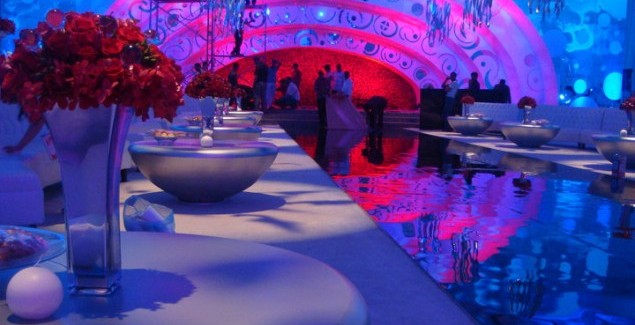 Ramadan 2012 will start on or about Thursday, 19 July.  However, prior to the holy month of Ramadan, there will be a flurry of weddings in Saudi Arabia.  That is not to apply weddings are quickly arranged….oh no…just like in America weddings are well-planned and eagerly anticipated.  It has though become a tradition for there to be more Saudi weddings in the weeks prior to Ramadan though than at other times of the year.

Just like a Western style wedding, the bride will search for the perfect dress.  Most Saudi brides do wear a long white wedding gown just like the gowns in fashion in the United States.  Right now in the larger Saudi cities there are bridal shows and fairs going on.

The men will typically wear their traditional thobes to a wedding.  Special guests and male members of the groom’s family may wear a bischt over their thobe.  The wedding hall for the men is generally a large room with comfortable chairs and perhaps some couches.  The groom’s party may have either live traditional music or recorded music.  The men will enjoy dancing traditional dances and everyone will congratulate the new groom and his family.

The bride’s party is likely more livelier than the groom’s party.  The women guests will have given careful thought and consideration on what they will wear to the party.  It’s not uncommon for Saudi women to buy a new dress (gown) for each wedding attended.  In addition to the gowns which rival what one would see at the Academy Awards, women also have their hair and make-up done in addition to wearing some of their finest jewelry.

Like the groom’s party, there is also either live traditional music (played by an all female band) or recorded music.  The women will pay their respects to the bride after she makes her entrance and enjoy visiting and dancing with each other.  Weddings are also a key time for the young single women to be seen and assessed as prospective marriage partners for single sons, grandsons, nephews and perhaps cousins.

The two wedding parties, that of the bride and the groom, are usually side by side at a wedding banquet facility or large hotel.  A married couple may arrive at the wedding together but they will go to different entrances which are usually separated by distance.  The bride’s reception usually lasts longer than the one for the groom.

It’s customary for one not to arrive prior to 11:00 pm for a wedding party regardless of the time specified on the invitation card.  Most wedding parties, especially for brides, generally last until about 4:00 am.

The wedding celebration is considered over after the meal (and dessert) have been served.

The Saudi wedding is also an occasion for the “tribe” to gather.  Both close and distant relatives are invited as well as friends and sometimes colleagues.  Saudi weddings can easily have 500 – 800 guests or more.

One Response to It’s Wedding Season in Saudi: So What Happens?