It’s ‘Summertime’ and In Jumeirah ‘The Cotton Is High’ 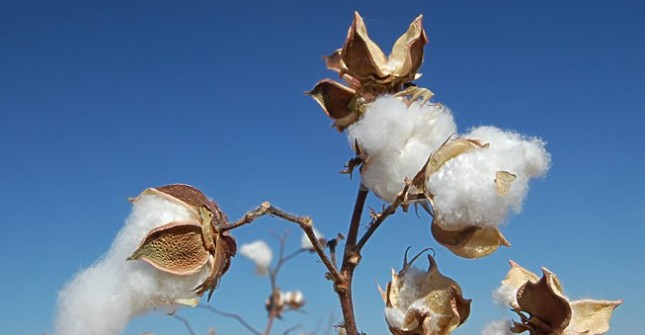 Thinking of starting a cotton cottage industry in Dubai?

I have just the place and plant for you in the beautiful residential area of Jumeirah.

One of the many pleasures and advantages of walking a dog is to observe the plants, flowers and nature in general along the way in all seasons.

Admittedly, the seasons in Dubai are muddled, with no spring or fall and a warm and short winter. Still, the natural word follows its own rhythm.

Due to work hours, I only walk my friends’ dog on Friday evenings these days. It is an hour walk I treasure for the time spent with the “little one” and the time we share one-on-one outdoors. You can meet “Habibi of Dubai” in a post I wrote a couple of years ago.

It is on one of these walks a couple of months ago that I spotted a strange shrub with some yellow-whitish flowers. A few weeks later, the flowers had disappeared and were replaced with large bolls. This kindled my curiosity further.

I kept passing by this shrub, mingled with other bushes, to see how it was developing.

A couple of weeks ago, the bolls had opened to reveal cotton!

Cottonseeds are usually planted in the spring, and I don’t know how these landed on the side of a villa’s fence, across from the road.

The flower buds take about three weeks to come out. The plant, like this one, grows between two and five feet tall.

When the flower dries and falls off, the boll — or seedpod — is formed.  Each branch of the cotton plant might grow several bolls. Inside the seedpod, there are 20-40 seeds plus white fibers. When the pod dries and splits open, the fibers and seeds are ready to pick.

Cotton, the soft, fluffy staple fiber grows in a boll, or protective capsule, around the seeds of cotton plants of the genus Gossypium. The fiber is almost pure cellulose.

Cotton was independently domesticated in the Old and New Worlds.

The English name derives from the Arabic qutn قُطْن, which began to be used circa 1400 CE. The Spanish word, “algodón,” is likewise derived from Arabic.

The use of cotton for fabric is known to date back to prehistoric times; fragments of cotton fabric dated from 5000 BCE were excavated in Mexico and the Indus Valley Civilization (modern day Pakistan).

Although cultivated since antiquity, it was the invention of the cotton gin that so lowered the cost of production and led to its widespread use.

It is the natural fiber textile that is most widely used in clothing today.

China is the world’s largest cotton producer, but most of this is used domestically. The United States has been the largest exporter for many years.

The Greeks and Arabs were not familiar with cotton until the Wars of Alexander the Great. His contemporary, Megasthenes, told Seleucus I Nicator of “there being trees on which wool grows” in “Indica.”

So how about it? Shall we start a cottage cotton industry in Jumeirah?