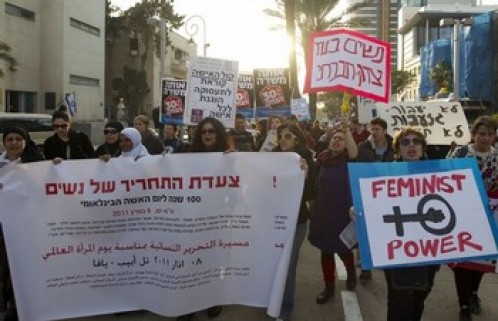 Despite appearances, in actual fact developments within Arab society in Israel suggest that traditional patriarchal attitudes towards women within Arab society are becoming even more firmly entrenched, not less. Indeed, Jewish women in Israel fare better than their Arab counterparts overall, but in their case too, there is still much left to be desired.

In the struggle for gender equality in Israel, Jewish and Arab women could achieve far greater gains if they were to join forces and build a shared agenda for change.

Regarding Arab women (particularly Muslim women) in Israel, there are two trends which, in my opinion, suggest the increasing prevalence of traditional patriarchal values: the fact that the marriage age for women has dropped, and that more and more women are covering their hair with the hijab (headscarf).

Surprisingly, these developments are occurring simultaneously with a rise in Arab women’s level of education and an increased desire to join the workforce. This seeming contradiction between increased restrictions on women on one end, and an acceptance of greater freedoms on the other, sends a complex message to Arab women: yes, you as a woman can study and leave the house to work but only once you have submitted to traditional family and dress codes.

Moreover, attempts in the past few decades to empower Arab women in Israel by encouraging them to study, to work and play a role in public life have not translated into real equality. Thus, for example, the number of Arab women who have integrated into the work force is limited to 19 per cent, with half of those working in education. Forty-three percent of Arab female academics in Israel are unemployed, and Arab women constitute the poorest segment of Israeli society.

In the academic and public discourse, the marginal place of the Arab woman is mainly attributed to her social and cultural status within a patriarchal society. But some of the arguments focus on the role of the state and its institutions in helping preserve a patriarchal tradition precisely because in the name of respecting cultural differences the government chooses not to interfere with attitudes towards Arab women within their own society.

Thus, Arab women find themselves caught between the burden of tradition and patriarchy on the one hand, and a multi-cultural, hands-off attitude by the state on the other.

Arab and Jewish women share a similar plight in that both groups pay a heavy price for the ongoing conflict between the two peoples. The price is two-fold: both groups of women are kept out of the centres of decision-making, and they are expected to put their need for gender equality on hold. Women are repeatedly told that gender equality is secondary to the more pressing demands of national survival.

As Arab and Jewish women who represent half of the Israeli population, we must fight together for our rights in the workplace and in education; we must work to bring women into parliament and into the centres of decision-making, breaking the male domination of the social and political processes.

Last week, International Woman’s Day presented an opportune moment to urge both Arab and Jewish women in Israel to work together to advance an alternative gender agenda.

We can and must cultivate the practice of compassion and tolerance as the basic building blocks for a language of dialogue which can challenge the aggressive discourse that dominates our reality.

Israeli women – both Jewish and Arab – can bring a richness to the discourse that goes beyond the television screen. We would do well to merge our struggles for gender equality, and equality between our two peoples on the grassroots and political levels. Women who bring life into the world have the right and duty to preserve it, and should therefore strive to place themselves in the centre of action and decision-making processes.