Israel in Race With Time: ‘Give Peace a Chance?’ 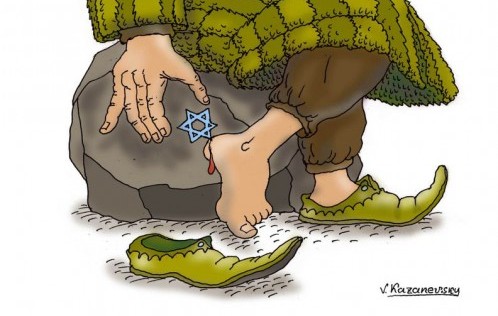 The Republican candidates for president once again tried to out-do the Likud Party in their devotion to the doctrine of the Iron Wall and their attempt to erase the Palestinian people from history and justify their being kept in a condition of statelessness and lack of citizenship in any state.

(The first thing the National Socialists in Germany did to the Jews was to strip them of citizenship, understanding that a stateless people is “flotsam” that no one wants and which lacks any legal standing).

Israel is in a race with time. The 11 million Palestinians are not going to go away, and those in the West Bank, Gaza and Lebanon have gained powerful new friends because of the Arab uprisings of 2011. Israel can only survive in some recognizable form if it achieves peace with the Palestinian people and with their supporters in the Muslim world, which means making arrangements for Palestinians to have citizenship in a state. Israel caught a break during its first 60 years because its Arab neighbors were largely peasant societies with low literacy, few modern organizational skills, and a significant technology gap.

That advantage is evaporating as Middle Easterners become more and more sophisticated. In the 2006 Lebanon War, Hizbullah and its backers (Iran and Syria) cracked Israeli communications encryption and so knew everything the Israeli army planned to do as soon as the orders were radioed. Hizbullah used micro-war techniques, including small rockets, the emplacements of which could not be easily found and destroyed, to force 1/4 of Israelis from their homes. Toward the end of the war Hizbullah was threatening to hit toxic gas storage areas in Haifa and it wasn’t clear that the Dimona nuclear facility was safe. Tiny Hizbullah, with only about 5,000 fighters, drawn from a religious group with only about 1.5 million members in Lebanon, is a harbinger of things to come. Arabs and Muslims are no longer push-overs, and will become less so over time.

It is unrealistic to think that little Israel, with about 7.5 million people (20% of them Palestinian-Israelis), can forever dominate militarily some 400 million Muslims in its neighborhood–Muslims who overwhelmingly side with the Palestinians.

The alternative is to make peace, and peace requires a settlement of the issue of Palestinian statelessness and a drawing of final boundaries in Israel’s land disputes with neighbors. (The firmest boundary is already that with Egypt, precisely because Egypt is the most militarily powerful of the neighbors).

Palestine was recognized as a Class A mandate after WW I by the League of Nations, and, like Syria and Iraq, was scheduled for statehood. League of Nations members France and Italy consistently pushed back against Lord Balfour’s attempts to interpret the Mandate as permitting the expropriation of the Palestinian majority. As late as the British White Paper of the late 1930s, the British envisaged a Palestinian state in ten years. Palestinian statehood was forestalled when the Jewish settlers (brought into Palestine by the British colonial authorities) engaged in a systematic campaign of ethnic cleansing in 1947-1948 that left hundreds of thousands of Palestinians homeless and stateless.

As Hannah Arendt and SCOTUS chief Justice Earl Warren recognized, citizenship is the right to have rights. Without citizenship in a state, Palestinians never really own property or have any other civil or human rights, since if someone steals from them they have no state to back their claims. In almost all legal proceedings, they lack standing. Palestinians once given Jordanian citizenship have sometimes recently had it withdrawn. Palestinians in Lebanon cannot own property, vote, in most cases cannot get work permits or business licenses, and mostly are not permitted by other states to travel to them, since Palestinians don’t have a home country or proper passports and so are seen as an illegal immigration risk. Far from being “Arabs,” many Lebanese Christians reject that identity and they are not going to give citizenship to Sunni Arabs expelled from Mandate Palestine by the Israelis, since that would weaken the Christians’ own position in Lebanese politics. The Israeli supreme court even just declared that Palestinians married to Israeli citizens can never achieve Israeli citizenship. The stigma of being a stateless Palestinian can never be removed, and Palestinian families have no more right to stay together in Israel than the families of black slaves in the Old South (where Newt Gingrich still thinks he lives) had a right to stay together.

So here is what Romney said in the debate:

How would a Republican administration help bring peace to Palestine and Israel when most candidates barely recognize the existence of Palestine or its people? As a Palestinian-American Republican, I’m here to tell you we do exist.

BLITZER: All right. Let’s ask Governor Romney, first of all.

What would you say to Abraham?

ROMNEY: Well, the reason that there’s not peace between the Palestinians and Israel is because there is — in the leadership of the Palestinian people are Hamas and others who think like Hamas, who have as their intent the elimination of Israel. And whether it’s in school books that teach how to kill Jews, or whether it’s in the political discourse that is spoken either from Fatah or from Hamas, there is a belief that the Jewish people do not have a right to have a Jewish state.

And I believe America must say — and the best way to have peace in the Middle East is not for us to vacillate and to appease, but is to say, we stand with our friend Israel. We are committed to a Jewish state in Israel. We will not have an inch of difference between ourselves and our ally, Israel.

This president went before the United Nations and castigated Israel for building settlements. He said nothing about thousands of rockets being rained in on Israel from the Gaza Strip. This president threw –

ROMNEY: I think he threw Israel under the bus with regards to defining the ’67 borders as a starting point of negotiations. I think he disrespected Prime Minister Benjamin Netanyahu.

I think he has time and time again shown distance from Israel, and that has created, in my view, a greater sense of aggression on the part of the Palestinians. I will stand with our friend, Israel.

As Ron Kampea points out at a blog of the Jewish Telegraphic Agency, Obama has in fact complained about Gaza rockets hitting Israel.

And, Hamas is not the leader of the Palestinian people. The PLO has the presidency of the Palestine Authority, and it recognized Israel long ago in return for an agreement that the Israelis would stop stealing Palestinian land and allow Palestinians finally to have a state and escape the chattel-like estate of statelessness. The Israelis took the recognition but reneged on the other promises, which hasn’t encouraged other Palestinian parties to give away the bargaining chip of recognizing Israel before there are even serious negotiations.

At least, as Kampea points out, Romney got the nuance right when speaking of Obama’s statement that 1967 borders should be the basis for negotiations.

But the Republican Party now seems to have a Greater Israel position that would bestow all the West Bank on Israel, including East Jerusalem, but without saying what should be done with the millions of Palestinians under Israeli occupation.

Alan Grayson once said that the Republican health care plan is, “Don’t get sick. If you get sick, die quickly.” The Republican plan for 11 million Palestinians is shorter. It is just, “Die quickly.”

Then Newt Gingrich weighed in (and I do mean weigh):

“BLITZER: Speaker Gingrich, you got into a little hot water when you said the Palestinians were an invented people. GINGRICH: It was technically an invention of the late 1970s, and it was clearly so. Prior to that, they were Arabs. Many of them were either Syrian, Lebanese, or Egyptian, or Jordanian.

You have leadership unequivocally, and Governor Romney is exactly right, the leadership of Hamas says, not a single Jew will remain. We aren’t having a peace negotiation then. This is war by another form.

My goal for the Palestinian people would be to live in peace, to live in prosperity, to have the dignity of a state, to have freedom. and they can achieve it any morning they are prepared to say Israel has a right to exist, we give up the right to return, and we recognize that we’re going to live side-by-side, now let’s work together to create mutual prosperity.

And you could in five years dramatically improve the quality of life of every Palestinian. But the political leadership would never tolerate that. And that’s why we’re in a continuous state of war where Obama undermines the Israelis.

On the first day that I’m president, if I do become president, I will sign an executive order directing the State Department to move the embassy from Tel Aviv to Jerusalem to send the signal we’re with Israel.

Gingrich implies that Hamas, the ruling party in Gaza, is responsible for the eleven rockets. Gaza is a mess, reduced by Israeli occupation to a 1.6-million person slum, where people are not even permitted by Tel Avivi to export 99% of what they make or produce, where unemployment is astronomical, and where 55% of the population is food insecure. It is a congeries of refugee camps where the families expelled by the Zionist forces in 1948 live in squalor and once-flourishing towns and villages now cut off from their markets by Israeli malevolence. Hamas doesn’t control Gaza, and radical groups, fostered by the concentration camp-like conditions of the Strip, are the ones who fire little home made rockets over the border sometimes. Since Israel has 200 nuclear warheads, you’d think it might survive somebody’s high school chemistry set and some taunts.

There are tens of thousands of Palestinians in East Jerusalem, and they are 35% of the Israeli-created district of Jerusalem, and the status of Jerusalem is a matter to be settled in final status negotiations. For Gingrich to forestall peace negotiations by unilaterally giving all of Jerusalem permanently to Israel would not lead to peace, but to further generations of conflict. Americans, who keep telling the Palestinians that unilateral actions at the UN cannot lead to peace, nevertheless favor Likud Party unilateral actions when it comes to Israel.

Everyone knows that Newt Gingrich is in the back pocket of casino billionaire Sheldon Adelson, who worships Binyamin Netanyahu of the Likud Party like a golden calf, and that Gingrich is playing for the vote of the Christian Zionists among southern evangelicals. He isn’t interested in peace or the welfare of Palestinians. Indeed, it seems unlikely he is interested in Israeli welfare, since the advice he gives Tel Aviv (yes) is likely to dig the state’s grave over the long term.