Islam and America: There’s Always Been A Problem 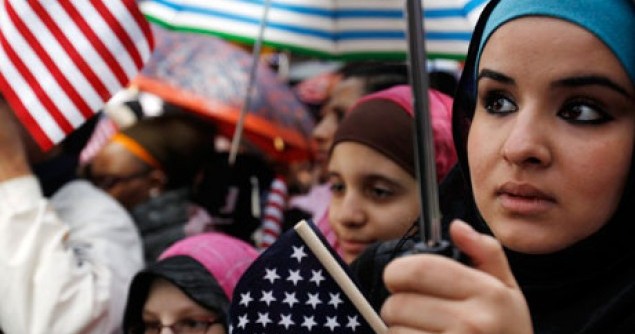 When I became Muslim about thirty years ago, I knew from just a rudimentary understanding of its religious precepts and principles that, belief wise, Islam was diametrically opposed to the history, philosophy and the moral disposition of US society.  What I remember striking me as most odd about discovering its existence (of Islam) after having attended the 5th best prep school in the country and spending three years in the Ivy League, was that I had never heard of it—at least not in its true sense. Instead, in retrospect, I had gotten a lot of misinformation that lead one to believe Islam was a black man’s anarchistic religion that saw violence as the solution to problems that existed between it the ‘land of the free and home of brave.’

During the Iranian Hostage Crisis, I don’t remember any newscast or editorial ever mentioning that the crazed and irrational Iranians had any claim to Islam. The public was presented the case that Ayatollah Khomeini, a religious ‘extremist’ that had somehow usurped power from American’s friend, the Shah ( a dictator). As a matter of fact, I remember chanting ‘nuke the Iranians’ like the rest of the ill-informed and inebriated pinheads at a local college bar, sure of the unequivocal guilt of the turban fanatic and his followers –whom had (according to the media), violated all manner of civilized codes of conduct of  peace loving nations by holding the US Iranian Embassy under siege.

Up to that time, the Cold War defined America as the good old boy on the block in the western world, which compared to anyone but the Russians, made everyone seem as relevant to the world historical scene as pigs in drag squealing at a fag hag bridal shower.

At the time, Reagan was the snow man for the Republican Party (probably because John Wayne didn’t want the job –such is the lot of the principled) and free market capitalism. Reaganomics shifted the economy and the government from community service to the logistics of corporate greed through the ironic lens of its own Marxist legalism. During and since Reagan, subsequent administrations have turned America into a police state where the US Constitution and the Bill of Rights have legislatively been abrogated by stacking the US Judicial Branch with clones of Moe, Larry and Curly.

The real problem the US has with the Muslim world population came to light when it was discovered Islam was the fastest growing religion in America. Not only that, it was (and is) the largest religion in the world. This little known fact at the time was announced on an episode of Jeopardy, a game show in America popular among city slickers as a source of interesting factoids to amuse and amaze.

The question, “what was the largest religion in the world?” All contestants were stumped, so Alex (the host) made the astounding revelation. He also added that it was the fast growing faith in the US.

Despite the well publicized denials by religious groups and government authorities amidst the buzz, Islam’s status as ‘the greatest’ in regard to the number of devotees was out. Its ever expanding hold on the American population was evidenced by an occasional news flash that allow the critical thinkers among us to further reflect. For example, in the late 80’s and 90’s while the Vatican was closing churches in the US due to lack of attendance (one of the big headlines at that time), the Muslims were happily buying and converting many of them into Masjids to meet the demand (somehow missed by the wire services).

And then there was ‘the war’ between the west and Islam which became so pervasive in Europe and Africa that they began to use the term “ethnic” instead of Muslim so everyone could pretend it wasn’t.

Such was the terminology in the on-going headline news about Somali, Bosnia, Chechnyia, Algeria and the numerous Soviet satellite Muslim republics breaking away around the time the USSR threw in the towel in Afghanistan. Larry King even had the audacity to claim the Palestinians spoke “Palestinian” rather than mention any religious connection in an interview with an Israeli who recounted his experiences impersonating a Muslim to infiltrate ‘the evil and malignant’ PLO because he was able to recite the Fatiha, the first chapter of the Quran.

The baseless ‘false flag’ wars in Iraq and Afghanistan leaving untold millions dead in the American War on Terror — which if examined for cause and effect before a world court like the Nazis were at the end of WW II, would without doubt become the saga of the American ‘War of Terror’.

America had to go to war against Islam because it presented a danger to its economic system and those who profit from it . An Islam state wouldn’t allow adjustable mortgages; stock market futures and all the high handed razzle-dazzle that put the western economies in the gutter—without which, ‘the one percent’ wouldn’t have a chance to nearly enslave ‘the 99.’ This is the big secret all the death and destruction and confusing rhetoric was meant to keep in the closet.

Regardless what the candidates say about what they are going to change, unless someone really intends to run for office on the real issues instead debating merely choices those in power give “the silent majority”(and the rest of us), I don’t really understand the point of any American election.

It hasn’t been about democracy, freedom and truth or saving the world from totalitarian regimes—otherwise why does America claim to support what it openly fights against?

Maybe it has always been about the money.