Interview: A Guide to Visiting the Real Palestine 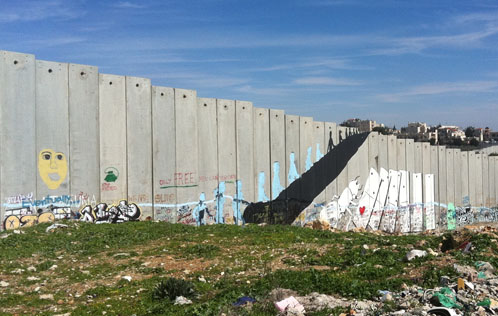 Every day, Fred Schlomka’s Green Olive tour company picks up a car-full of Jerusalem tourists and guides them through the Separation Wall into the Palestinian West Bank, visiting refugee camps, social enterprises and – in what’s been seen by some as a controversial move – settler communities.

Having joined one of these tours earlier this year, I recently interviewed Fred to find out first hand why he set up Green Olive Tours, and what he sees for the future of Palestine.

1. So, where did the idea for Green Olive Tours come from?

I launched Green Olive Tours in 2007. For many years I had been organizing specialized tours for two Israeli organizations that I worked for, Mosaic Communities and the Israeli Committee Against House Demolitions. These tours were aimed at activists and researchers who came to Israel/Palestine to further their understanding of the political issues here and experience the events on the ground.

I decided to offer these types of tours to a broader public, and include cultural experiences and some more conventional tourist activities. The blend of experiences serves the general tourist public and enables them to go home with a more rounded view of our country.

2. And why was it important to you to set up Green Olive Tours?

Most tour companies offer a ‘Disneyland’ view of the country, from a Jewish or Christian perspective, often excluding information, experiences, and sites that conflict with their worldview. Green Olive Tours tries to offer a more comprehensive experience while gently advocating for a more humanistic and democratic perspective.

The tours serve as a bridge between my political and professional work. Through traveling the West Bank almost every day I am able to monitor the situation and stay in touch with my contacts. Through offering tourists the opportunity to benefit from my experienced guides’ knowledge, and witness the impact of the Occupation, they often are motivated to become politically active when they return home. Some return as volunteers in the organizations we introduce them to.

3. Is it important for tourists to visit the West Bank?

It is extremely important. Most Israeli tour companies offer only limited opportunities to visit the West Bank, often telling their clients that it is too dangerous. However there are many important religious and historical sites in the West Bank, and hospitable Palestinians who are eager to tell their stories. No visit to the Holy Land is complete without at least several days visiting the West Bank.

4. What’s been the hardest part of setting up and running Green Olive Tours?

Lack of capital. We are a ‘bootstrap’ operation and completely self-funded. If there was access to capital then the business could grow faster. However growing in an organic fashion has its benefits. When we make mistakes it is less costly.

Another issue is marketing. All the major tour companies that conduct day-trips have full access to the residents of tourist hotels. Our brochures and flyers are rejected by the mainstream hotels for political reasons, and we are restricted to marketing through the smaller and Arab-owned hotels.

5. What do you think is the main thing that people on your tours get from the experience?

They see the reality of life in the West Bank and Israel, and are provided with enough information to make up their own minds about the issues. People-to-people contact is also much appreciated by our clients. On most of the tours they are able to meet Palestinians and Israelis, have conversations, and often to have lunch with a family.

6. You have recently launched a ‘Meet the Settlers’ tour. Why did you decide to run this tour? Has that been controversial?

The tour was started to give visitors the opportunity to hear from the settlers themselves about their philosophy and reasons for living in the West Bank. Some Israeli and Palestinian activists are critical of this tour. Since the settler/guide receives a fee, they feel that the tour is actually supporting the settlement enterprise.

However on balance I think that it is more important to educate tourists about the settlements than to worry about a few dollars ending up in the hands of a settler.

7. What are your hopes for the future of Israel and Palestine?

My hope is that we all can find a way to live together within a democratic framework. However the present trends of settlement expansion and lack of negotiations does not bode well for the immediate future.

I believe that any possibility for the ‘classic’ two-state solution is over. The idea is a fantasy that the settlers will be removed from the West Bank and a largely Jewish-free state is formed in the West Bank and Gaza. Reality must sink in. There are now over 600,000 Israelis living in the Occupied Territories. I think the best we can hope for is a Palestinian state that allows most of the settlers to remain under Palestinian sovereignty. This will preserve the national aspirations of Palestinians, and the integrity of the state of Israel.  Of course in Israelis are permitted to live in Palestine then Palestinians should also be permitted to live in Israel.

Perhaps a solution like the European Union may emerge – a Three-State Solution, which would put a third government on top of the two states, with a hard external border but a soft internal border.

Kim Willis is not just another travel blogger. She has studied International Relations, worked at the UN and other international institutions, and thrives on travelling (usually on her own) to the places in the world where the action is happening. Her popular blog, Global Socialite - www.globalsocialite.com - delivers both travel advice and reviews as well as features on international affairs. While usually based in London, Kim regularly travels through the Middle East and North Africa to report a first hand, unexpected and often humourous perspective on matters of global importance.

One Response to Interview: A Guide to Visiting the Real Palestine