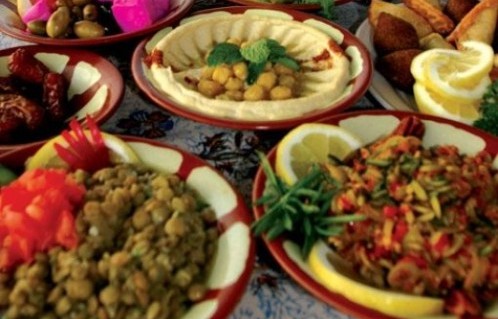 During the month of Ramadan iftar’s (breaking of the fast) become a special time.  Iftar’s can be shared events with family and close friends, even if some of the friends may not be Muslim.  It is an honor for a Muslim to share the rites of Ramadan.

If a Non-Muslim is invited to an iftar there are some rules of etiquette and protocol that must be followed.  The most important is to not only arrive ON TIME but perhaps five to ten minutes early.  Remember, the hosts have been fasting all day and are not going to hold up an iftar for a late arrival.

The breaking of the fast will generally begin with dates, Arabic coffee and water.  The dates provide instant energy and help take the edge off of the hunger that one feels after fasting all day.  Depending on the customs of the family, this initial breaking of the fast may take place with everyone sitting on a carpet on the floor or it could be at a table or seated in a salon.  Breaking the fast sitting on the floor together does give one the traditional feeling of Ramadan from many years past and in my opinion provides a special closeness among participants.

Some families after breaking the initial fast will then go and pray.  A non-Muslim may simply wait and relax while everyone prays.  If a Muslim woman does not join the family to pray nothing should be said or commented about that.  She is likely having her monthly menses and women do not pray during that time.

After prayer or in some cases directly from the initial breaking of the fast the group will shift to the dining room where food will be served.  Many families like to start their dinner with a lentil or wheat based soup accompanied with sambosas.  The soup is light, appetizing and very tasty.  Families are careful not to partake of heavy food too soon after breaking the fast.  Once the soup has been finished then there will likely be a variety of dishes, some traditional such as jereesh or garcon and some more Western like fish and chips.  The meal will generally end with a variety of fresh fruits offered but do not think that is the end of the iftar.

Many families after having some fresh fruit will retire to their salons and have traditional Saudi tea.  Once several glasses of tea have been consumed, desserts are usually offered.  During Ramadan it is common to have a variety of sweet desserts rich in honey or cheeses.  By the time the desserts have been consumed with another glass of tea it is generally time for the evening prayer.  At this point the iftar dinner can be considered over and a guest may make his or her departure.