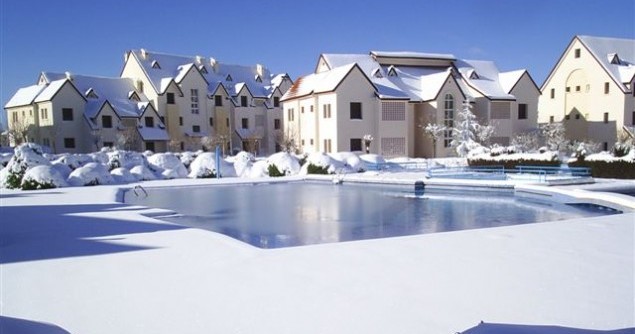 The View from Fez is in debt to Al Arabiya News for a timely reminder that Morocco is not all sun and dessert. The Atlas and High Atlas mountains have a great reputation for trekking and climbing, but also, for skiing. Now, Ifrane,‘Little Switzerland’, is holding its first ever snow festival.

Built by the French in a European style, Ifrane was once a summer resort for colonial families and has long been a popular winter destination for ski-lovers. But this year, the local authorities decided to hold the town’s first ever snow festival in a bid to widen the resort’s appeal and attract larger numbers of tourists.

“This festival has many objectives for the local population in the fields of tourism, culture and development. This is the first year we have done this initiative and we will see what further steps we may take for next year,” said chairman of the provincial council, Abdallah Ouhadda.

The event, which took place on Saturday (February 2), attracted thousands of visitors, both from Morocco and abroad. Alongside a colourful parade, one of the main highlights of the day was the ‘snow princess’ contest, which saw ten girls aged between 8 and 13 compete for the coveted title.

The idea of organizing a snow festival in Ifrane was first mooted two years ago, to boost tourism and promote the region’s rich Amazigh culture. One of the organizations behind the competition said the aim was educational. The chairman of the Toutrit – or ‘garden’ in Amazigh – Association, said organizers wanted the younger generation to be proud of their local heritage and more aware of environmental issues.

“Why a snow princess and not a snow queen? Because we wanted to play an educational role in this province for young girls and boys. The other objective of this event is to help local development in the region and also the marketing of local products,” said Abdelkader al-Achni.

Twenty kilometers away from Ifrane, the Michlifen ski resort is popular with urban dwellers who want to escape the cities and enjoy some outdoor exercise.

But as well as winter sports, Ifrane’s cool summer climate means the region continues to attract tourists all year round, as residents from cities such as Fes and Meknes seek to escape the scorching heat of the summer months.