Humour: A Potent Weapon Against Assad? 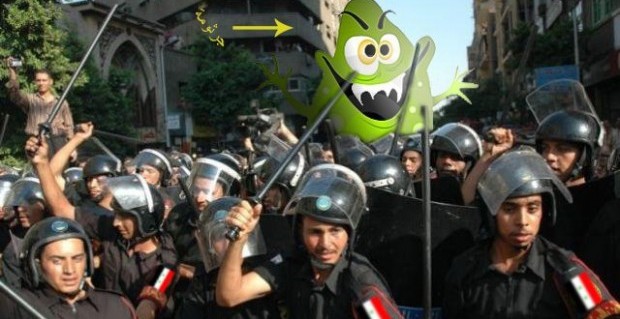 ”No great movement designed to change the world can bear to be laughed at or belittled.” – Milan Kundera

If the Lebanese don’t have the blackest sense of humor of anyone in the world, they certainly have the blackest sense of humor of any nationality I’m aware of. It’s a coping mechanism, I’m sure, and it rubbed off on me after a while. I’ve found myself laughing at things in Beirut that I wouldn’t have thought were remotely funny had I not spent so much time there.

I’ve never known Syrians to have a black sense of humor, but maybe they’re starting to get one. (Or perhaps I’ve been unaware of it until now.)

[Activists] dyed the public fountains of Damascus and Hama blood red. They scribbled anti-regime slogans on hundreds of ping-pong balls and rolled them down into the Damascene streets from a tall hill. They created phantom demonstrations by recording rallies in one city and broadcasting them from loudspeakers hidden atop buildings in another. And so they forced Assad’s goons to spend time frantically draining fountains, sweeping ping-pong balls from sidewalks, and chasing imaginary street protesters.

Online, activists amplified their message with darkly humorous creations such as “Top Goon: Diaries of a Little Dictator,” a weekly YouTube series starring a finger-puppet Assad tormented by his conscience and forced to appear on the game show “Who Wants to Kill a Million?” Other videos lampooned Assad’s insistence that foreign “infiltrators”—mundas, in Arabic—are leading the uprising. In one, a toddler sported revolutionary garb and boasted of being the “smallest mundas” in all Syria.

Activists also created mocking pages on Facebook. One for the “Homs International Tank Wash and Lubrication Centre” pretended to reflect a small-business boom created by the army’s occupation of civilian neighborhoods.

But you know who doesn’t have a sense of humor in Lebanon? No sense of humor at all? Hezbollah. It’s as humorless as the KGB during the Brezhnev era.