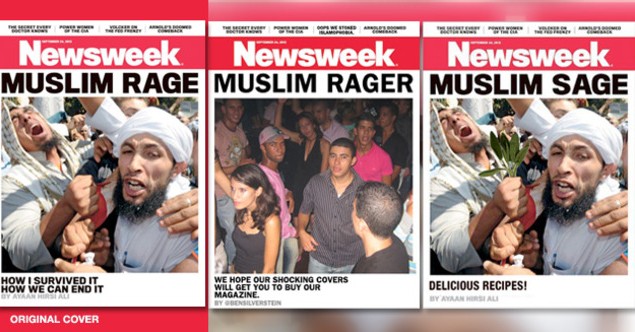 In a cartoon published in Egyptian newspaper Al-Watan at the end of last September, a man holds up a newspaper. “They’ve sold me a fake newspaper!” he cries to his friend. “Is it really possible that today no country, no film, not even a cartoon insulted Islam?”

What a month September has been for the world’s Muslims. First, a YouTube video insulting the Prophet Mohammad was publicised on 11 September and spread insult across the Muslim world.

Then, after several very localised but violent protests against it in the Muslim world, French satirical magazine Charlie Hebdo published a cartoon depicting what appeared to be a Muslim in a wheelchair pushed by an Orthodox Jew. It was a reference to the title of French blockbuster The Intouchables whose main characters are a disabled white man and his black helper – ironically, an uplifting stereotype-breaking comedy – to imply that religion could not be criticised. But what must have appeared to a Western audience as a statement about the sensitive nature of religion, anchored in French cinematic and secular culture, was perceived by most non-Western Muslims, who had probably not seen the film, as yet another way to belittle their religion.

Two imaginary monolithic blocks, the Muslim and the Western worlds, clashed once again. While in the media journalists rightly debated the fine line between freedom of expression and hate speech, the actions of a few extremist, or irresponsible, individuals fed into two infinitely flawed stereotypes: the West is waging an anti-Islam campaign, and Muslims are angry. The only people set to benefit were extremists of all avowed religious affiliations.

It all felt ridiculous and depressing. But amid the misconceptions, there were also creative initiatives developed by intelligent individuals to debunk these stereotypes and foment intelligent debate on the responsible use of freedom of expression. Here are two, one from the West and one from the Muslim world, which deserve to be highlighted.

After the great journalists who, in Egypt at least, highlighted widespread opposition to the violent protests against the offensive video, my favorite initiative was a peaceful, sarcastic social media campaign in response to a Newsweek magazine cover focusing on the recent protests which was branded with the words “Muslim rage” and a stereotypical image of an angry, bearded, and – yes –turbaned man.

In his article 13 Powerful Images of Muslim Rage on the entertainment and news site Gawker.com, American blogger Max Read posted the following pictures: an Egyptian man on a chair reading a newspaper, a Jordanian girl on a swing, an Iraqi performing a high dive into a sparkling swimming pool, lovers in Iran and a tiny girl in bright pink jacket clutching an Egyptian flag. “Insane #MuslimRage”, reads one caption. There couldn’t be anything less enraged about them.

While Read disarmed a negative image with more representative images, in Egypt, liberal newspaper Al-Watan replied to cartoons with cartoons. But they were not spiteful.

Instead the series, published on 24 September, was a clever comment on cultural misconceptions, media representation and double standards. The cartoon described at the beginning of this article is one of them. Another depicts a bearded man in long white Middle Eastern dress and a punk. “What weird clothes he’s wearing!” both think as they cross paths. In a third, a man in a hat sees a man with a long unruly beard. “A bearded terrorist!” he cries, before he catches a glimpse of the star of David on his cap. “Sorry I didn’t see properly!” he stumbles, offering him a flower. The most evocative perhaps shows two portraits: one of a man in front of a mosque, and another of a wild-bearded, wild-toothed man in a turban holding a bloodied knife with plumes of smoke behind him. A torch painted with the American stars and stripes shines on the second image and leaves the first in the dark. On the torch, the cartoonist could equally have written “media”.

Humour is a great tool to highlight the media’s shortcomings, but more responsible journalism, highlighting diversity of opinion within one religious or cultural group, might help to reduce stereotypes in the first place.

Alice Hackman is a freelance journalist based in Cairo.