How To Secure Women’s Rights in Afghanistan 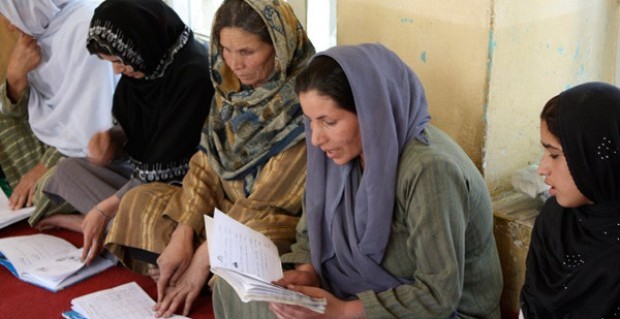 The Obama administration is under mounting pressure to accelerate the withdrawal of US troops from Afghanistan. The US-led coalition plans to hand over security responsibility to Afghan forces by 2014. The military withdrawal shouldn’t mean that the international community walks away from Afghanistan entirely, however, or ceases support to local civil society –especially when it comes to preserving the hard-won rights of Afghan women. How is this possible?

To search for answers, my colleague at Notre Dame University’s Kroc Institute for International Peace Studies Sarah Smiles Persinger and I authored the report Afghan Women Speak, based on dozens of interviews in Afghanistan with female parliamentarians, activists, researchers, health workers and NGO leaders. This past October I visited Kabul to assess the latest developments.

All the women we interviewed said they want the war to end. They cannot secure their rights in a militarised environment. The longer the war continues the more they are threatened by the Taliban and male reactionaries in the Kabul government. Woman favour peace negotiations, but they do not want an agreement that revokes laws, like the 2009 Elimination of Violence Against Women Act, or that fails to sustain vital services for women.

What do women recommend? The first and most obvious need is continued support for the economic and social development programmes that have already improved the lives of Afghan women and children. “Invest in Afghan youth”, said a woman leader, “not in corrupt leaders.” With development funding from USAID, the World Bank and European Union member states, millions of women have acquired an education and gained access to health care.

These achievements are among the few bright spots of the international mission in Afghanistan. They must be sustained as foreign troops withdraw. Improved education is a priority. In 2002 only 900,000 boys attended primary school. Today more than seven million girls and boys are enrolled in school. School attendance rates have increased sevenfold over the past decade. Girls now comprise 37 per cent of the student population. More than 4,000 new schools have been built, many through cooperation between international programs and local civil society. The number of teachers has increased from 20,000 (all men) in 2002 to more than 150,000 today (almost 30 per cent women).

Progress also has been achieved in lowering Afghanistan’s rates of maternal and child mortality. Since 2001 the number of health facilities and trained health workers has increased tenfold. More than 3,000 women have been trained as midwives, a sevenfold increase. According to the latest Afghan government figures, based on a survey conducted with support from USAID and the UN, the rate of children dying before age 5 has dropped from one in five to about one in ten. The risk of a woman dying in childbirth has dropped from one in eleven to one in 50. These rates are still shockingly high, but the trends are moving in the right direction. The improvements of the last decade translate into hundreds of thousands of lives saved among Afghanistan’s most vulnerable people.

Despite these gains, much work remains to be done. In rural communities, where most Afghans live, health care remains primitive and preventable disease is prevalent. Primary school attendance has increased, but secondary school and higher education remain unavailable to most Afghan youth. Social development programmes must continue even as military expenditures begin to decline.

A second priority is to preserve women’s political rights. Women are equal before the law in Afghanistan today, and 25 per cent of the seats in parliament are reserved for females. The best guarantee against these rights being rolled back is ensuring that women have a seat at the table in peace negotiations. Only a handful of women are members of Afghanistan’s High Peace Council, which is responsible for guiding the reconciliation process with the Taliban. Western policymakers must pressure the Afghan government to ensure that women are included more meaningfully in high-level decision-making forums. Secretary of State Hillary Clinton has shown exemplary leadership in advocating for Afghan women’s rights. Other US and Western officials should follow her lead.

Afghan women want peace, but they need continued support for their social and political rights. The withdrawal of troops must not come at the expense of a commitment to development and human rights.

3 Responses to How To Secure Women’s Rights in Afghanistan