How NOT to Educate Children About 9/11 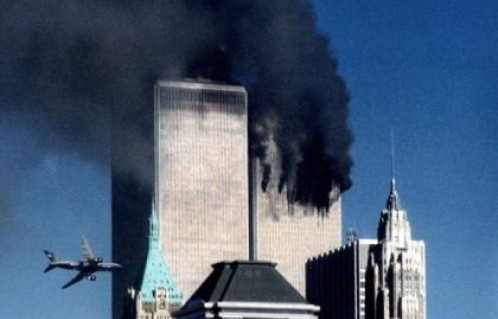 As the tenth anniversary of 9/11 approaches, the simmering tea-partying Islamophobic mindset of the “Land of the Free” has come up with a memorial coloring book for children. The publisher’s press release says it all:

To the American people and all others who may read this child’s coloring book, We Shall Never Forget is designed to be a tool that parents can use to help teach children about the facts surrounding 9/11. This book also describes basic freedoms in America. We suggest parental guidance. As the 9/11 events are shown countless times on national media, this book will help children understand the meaning of these events. The book was created with honesty, integrity, reverence, respect and does not shy away from the truth. In this book you will see what happens to a terrorist who orders others to bomb our peace loving wonderful nation.

Here is propaganda so blatant and smiley gross that it deserves a place alongside the insidious emulation of Lenin by the Soviets and idolization of dictators the world over. The cover image is an interesting spin on the separation of church and state in our land of the free: here we see the tattered American flag flying above a cross illuminated by a beam of light from above, at the feet of which lie a firefighter’s helmet and police hat. To label the libel in this colorfully designed “Kid’s Book of Freedom” a “Graphic Coloring Novel” strikes me as a misspelling; is it not more aptly named a “Pornographic Coloring Novel,” to be rated so for the sensational violence mongering rather than any out-of-place showing of body parts?

The most offensive image in the book is one in which an American soldier is shown aiming a rifle at Bin Laden, who is cowering behind a woman in hijab. The caption for this is:

“Being the elusive character that he was, and after hiding out with his terrorist buddies in Pakistan and Afghanistan, American soldiers finally locate the terrorist leader Osama bin Laden,” runs the text accompanying the picture. “Children, the truth is, these terrorist acts were done by freedom-hating radical Islamic Muslim extremists. These crazy people hate the American way of life because we are FREE and our society is FREE.”

Free to be bigoted and hateful with no sense of civil decency. Yes, our society is free for books like this to be published and sway young minds with the rhetoric of spite. But the value of freedom is in proportion to civility rather than age-old distrust feeding on willful ignorance. There was precious little freedom for African slaves, who were blamed with a Hamitic biblical bias for their own destiny of servitude, nor for the native inhabitants of the Americas, who were demonized so the white man could rid his New World of the red man. For far too long in our country freedom has been in the eyes of the beholder of power. At least our founding fathers had the sense not to invoke the prevailing sectarian views of a vengeful God and elevated the Deity to a position that anyone of any sincere religious conviction could appreciate.

Children, the truth is that the act of terrorism on September 9, 2011 was done by a politically motivated individual who no more speaks for the religion and vast majority of Muslims worldwide, especially in our free country, than Torquemada did for the entire sweep of Christianity or even Catholicism. It was not our freedom that is hated, but our interference. The United States has an imperialist history, against the native inhabitants, Mexico and Spain (all before the last century). Hawaii did not become a state, nor Puerto Rico a territory, nor the Philippines a nation of American English speakers because they were nearby the original thirteen colonies. We went to war with Spain and these were the spoils; spoiled these lands were for the commercial benefit of the missionizing Americans. If you want to truly love this country, and it is worth loving, then do not deny its faults but change them: make freedom more than a slogan slicked up with religious rhetoric.

Adults, as all of us parents should have learned, there is a world out there of lies, distortions and self-serving propaganda that blinds us from appreciating the values that freedom should involve. This coloring book only pours salt on the wounds of those who suffered the 9/11 bombing, including the scores of Muslims who were in the Twin Towers that day. Ironically, there is no passage in the book of “what would Jesus do,” although the author may think he knows what to do better than Jesus. There is a passage in the Gospels (Mark 10:14) where Jesus says “Suffer the little children to come unto me.” Not “make them suffer” more hate speech, but rather be like children who love naturally and can of course learn to hate when so taught or treated or given coloring books like this. I do not think the Jesus of the Gospels would have handed out this coloring book to the children he met. I suspect, rather, he would have dashed it to the ground as he did the hypocritical moneygrabbers at the gates of the Temple.