Horse Meat Furore: Time for a Trip Down Memory Lane 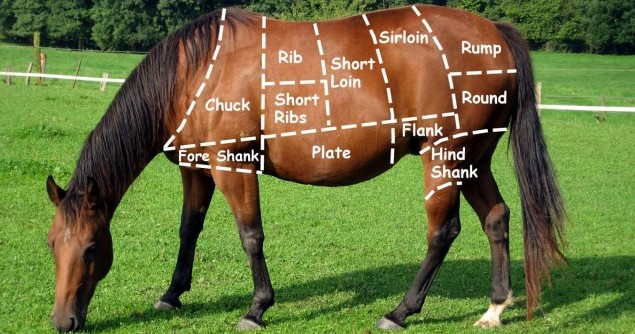 The current uproar in the UK about horsemeat made me recall the mindset of my younger self. I grew up in Tunisia, where my parents were posted until 1973. That’s where I went to school and started university.

When I was at the French Lycée in La Marsa, opposite the train station there was a sandwich shop we used to often pass by after school. It served horsemeat, as did many other such outlets.

The best were the salami sandwiches that were my top pick and I can still remember as delicious.

When I told my parents, they were a bit shocked. My dad investigated further on his weekly market run. He reported horsemeat was widely available at butchers’. He got some steaks to cook for our dogs. But when our housekeeper and gardener saw them, they were surprised that it wasn’t for our own consumption. So their share of horsemeat steaks was added to dad’s weekly shopping list to their great delight.

Irish food inspectors had found almost 30% horsemeat in one brand sold by Tesco. Iceland, Lidl and Aldi and Dunnes also found smaller amounts in sold beef burgers.I went down memory lane after reading about horsemeat being found at Tesco and other supermarket burgers in England and the Irish Republic. Tesco placed full-page ads in UK newspapers apologizing.

Officials said the adulterated products posed no risk to human health but were removed from shop shelves.

A total of 27 burger products were analyzed, with 10 of them containing traces of horse DNA and 23 containing pig DNA. In addition, 31 beef meal products, including cottage pie, beef curry pie and lasagna, were analyzed, of which 21 tested positive for pig DNA.

All those years ago, the world was a different and more isolated planet. We were less exposed to news, opinion and political correctness.

Rather than Google everything, we relied on common sense. I have long since moved away from meat and certainly chicken that I only eat if I have to.

The sale of horsemeat in supermarkets and butchers is minimal, and most of the horsemeat consumed in the UK is imported from Europe, predominantly the South of France, where it is more widely available.

Historically, horsemeat is major meat in only a few countries, notably in Central Asia. But it forms a significant part of culinary traditions elsewhere — in Europe, South America and Asia.

I don’t really remember the taste, but horsemeat is said to be slightly sweet, tender, low in fat, and high in protein. However, because of the role horses have played as companions and as workers, and concerns about the ethics of the horse slaughter process, it is a taboo food in some cultures.

In many parts of Europe, the consumption of horsemeat continued throughout the Middle Ages until modern times, despite a Papal ban in 732.

France dates its taste for horsemeat to the Revolution. With the fall of the aristocracy, its auxiliaries had to find new means of subsistence. It was during the Napoleonic campaigns, when the surgeon-in-chief of Napoleon’s Grand Army, Baron Dominique-Jean Larrey, advised the starving troops to eat the meat of horses.

In 1866, the French government legalized the consumption of horsemeat and the first horsemeat butcher’s shop opened in eastern Paris, providing quality meat at lower prices.

Despite the general taboo, horse and donkey meat was eaten in Britain, especially in Yorkshire, until the 1930s, and surged in popularity in the United States in times of post-war food shortage.

The killing of horses for human consumption is widely opposed in countries such as U.S. and Britain, where horses are generally considered to be companion and sporting animals only. But Europe takes exception. In Belgium, Germany, Italy, Luxemburg and other states, it is commonly found, sold in most supermarkets and many butcher shops.

Have you had horsemeat? Where and in what form?