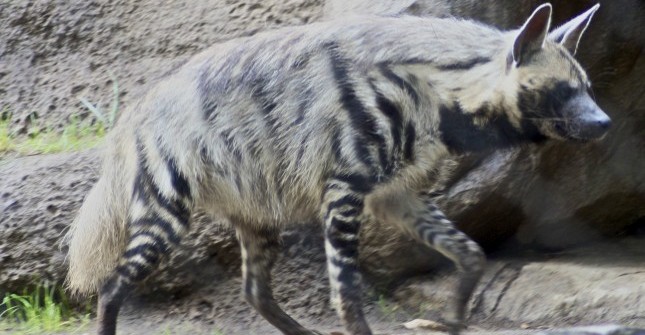 Who knew? Hyena, particularly the Striped Hyena, indigenous to the Middle East and North Africa, is considered halal by some Saudis. And that fact is causing a problem as hunting it is threatening its protected status in the Kingdom, Saudi Gazette reports.

While most schools of Islamic law consider hyena to be haram, that is, forbidden as food, the Shafi’i school permits it. And, since all schools are given equal weight/approval, it’s apparently permitted to those who follow that school. Most lists of halal/haram foods, however, put it in the forbidden category.

Saudis gorge on hyenas as they face extinction

TAIF — The thought of hunting and eating hyena might send shivers down the spine of some, but not Saudis.

Considered a unique and scrumptious delicacy, heynas are found in small numbers here but are largely consumed by Saudis. And while people continue to gorge on the beast’s meat, they seldom realize that they are on the verge of being extinct. According to a report published in Al-Watan last week, hyenas are on the list of animals threatened with extinction.

Ahmad Al-Bouq, director of the Wildlife Research Center in Taif, said: “Hyenas are threatened with extinction in the Kingdom. They are classified among the big beasts of prey, aside from the Arabian tiger and lynx.”

The ruling behind eating hyena meat in Islam is permissible. Dr. Saud Bin Mus’id Al-Thubaiti, member of the teaching staff at the faculty of Shariah at Umm Al-Qura University, and a former professor, said that the Prophet (peace be upon him) has forbidden eating the meat of beasts of prey that have canine teeth and birds that have claws. However, he permitted eating hyena meat.