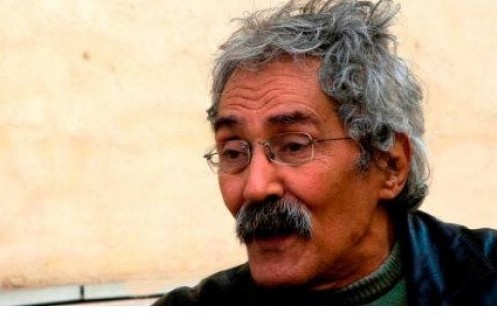 “The most beautiful of the Nile’s birds leaves the lake this evening,” Palestinian poet Mourid Barghouti wrote yesterday on Twitter. “Goodbye, Ibrahim Aslan.”

Aslan, one of Egypt’s greatest authors, entered the hospital yesterday with a heart complaint and passed away. He was 77.

Aslan was born in Tanta in 1935, but his family soon moved to Imbaba, where he spent his formative years and set much of his work. There, Aslan moved through several public and trade schools. His father worked at a post office, and Aslan too worked for a time with Cairo’s mail and telegraph systems.

It was here that the largely self-taught Aslan began to gather much of the material he would later use in his novels and stories. The building blocks of his work were, as he later called it, “the daily debris to which no one pays attention.”

Aslan’s reminiscences, collected in “Something Like That,” address the origins of his creative writing. Aslan was inspired, in part, by Anton Chekhov’s humorous short story “The Death of a Government Clerk,” in which a clerk accidentally sneezes on a general. Aslan also admitted that he gained a closer view of people’s lives from at least one letter swiped from the undeliverable bin. Keep reading.

Many thanks to Elliott Colla, translator of Aslan’s first and key novel The Heron, for responding to a middle-of-the-night query. A fuller version of his comments:

“The world lost a major writer today. Ibrahim Aslan was not merely a writer; he single-handedly remade the Egyptian novel in a number of ways. Mahfouz insisted that the novel had to be serious, even at the expense of humor, and those who came after Mahfouz accepted this for the most part, even when they wanted to move in other aesthetic directions. Aslan brought the novel back to earth — his characters speak Egyptian,they live banal lives filled with frustration, dead-ends, and stalled revolutions — and most of all, they laugh.

Mahfouz had the luxury of writing about the Cairo of Gamaliyya, whose neighbors were historic downtown and Abbasiyya, and, in his Cairo, it is as if the Infitah [economic “opening”] never really took place. In contract, Aslan wrote about an unromantic Imbaba and the impact of the Sadat counterrevolution — and when he did, he shifted the geographic center of the Egyptian urban novel about 5 miles west of where it had resided for half a century. Other than Aslan, perhaps only Yahya al-Tahir Abdallah is as important as an enduring influence on Egyptian writers today — and the attention to the details of lived life, the booming geographic peripheries, and the inimitable register of Egyptian idioms — these are the fingerprints that Aslan has left on contemporary Egyptian literature.”