‘Gaga, There’s More to The Burqa Than A Stage Prop’ 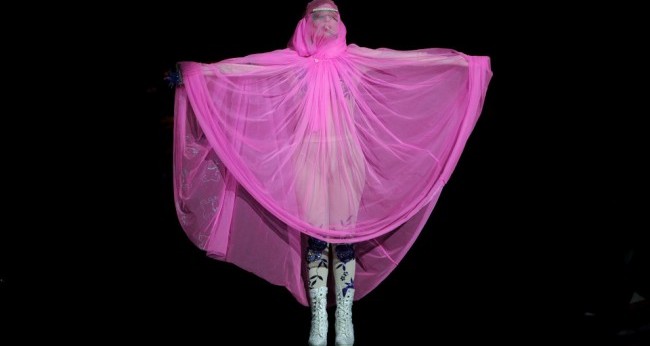 After a few appearances in public wearing a see-through burqa (a loose robe that covers the body, face and eyes), it appears Lady Gaga has taken her fascination with the garment to a new level with her recently leaked track Burqa (Aura).

Gaga’s use of the burqa has stirred controversy over allusions to racial slurs and the sexual characterisation of the burqa that has roots in Orientalism. A Huffington Post Live panel discussion hosted by Dena Takruri recently examined these themes.

Gaga is well within her rights to wear and sing about the burqa, but she should consider that the artistic liberties she takes may degrade an entire community. Despite some Muslims feeling upset, there’s still time for Gaga to become an ally for Muslims, just as she has been an ally to other groups.

As a Muslim African American woman, I am extremely leery about the exploitation of a cultural and religious symbol in this way. Millions of fans flocked to twitter last week to show their “Burqa Couture” as if the burqa were a costume, and not a symbol of religious devotion. Adults and teens alike posted pictures with towels wrapped around their heads titled #BurqaSwag, not realising the allusion to the “towel head” hate speech that many Arabs and Muslim Americans are accosted with. Even if playful or unaware, to me it’s eerily reminiscent to those who wear blackface for comedic timing or Halloween.

In addition, sexualising the burqa seems to disempower women who wear it for religious purposes. It risks giving the burqa meaning that takes away or overrides the meaning women who wear it have for the garment, especially given Gaga’s agency as an international celebrity. It’s reminiscent of Orientalist discourse, in which Europe interpreted the Arab world for others through an inferior, sexualised lens and passed it off as scholarship using their agency as academics and explorers.

Gaga is no stranger to championing women’s rights. In an interview she stated: “There is something mind controlling about the way we are taught to view women. My work is…both visually and musically a rejection of all of those things …The power of the wisdom of the woman, let’s make that trendy.”

She has also repeatedly advocated for the rights of other minority groups, such as the LGBTQ community, by speaking out against bullying and infusing political and social issues into her music.

It’s likely that Gaga may have also wanted to put out a project that would empower Muslim women. But Burqa (Aura) instead appears to devalue, mock and uphold the sexualisation of a garment donned by some Muslim women. Context is everything and the public has very little to help them decipher the message the pop singer is trying to disseminate.

By taking the concerns of many Muslims to heart, right now could be a defining moment in Gaga’s career: an opportunity to stand with Muslim women.

She could promote images that help stop stereotypes about the garment and Muslim women, or launch a public discussion about how Muslim women are empowered regardless of what they choose to wear.

Mother Monster (as her followers affectionately call her) could spearhead this very movement, starting with the music video for Burqa (Aura).

She could create a video that expands on the song’s lyrics by showcasing strong Muslim women, perhaps wearing a burqa or niqab (face veil), accomplishing great things in their careers, to provide context. The video could also visually represent how misguided the persistent sexualised view of some Muslim women’s clothing has become as a result of commonly promulgated views steeped in Orientalism.

Finally, the most important thing that Gaga can do is talk to Muslim women who wear a hijab (headscarf), burqa or niqab. Although the mainstream media has painted a picture of oppression and helplessness, we are intelligent, strong, secure and very capable of speaking for ourselves.

It’s my hope that the singer will take the feelings and opinions of many Muslim women to heart and respond in a way that allows for meaningful dialogue and alliance.

Keziah Ridgeway is a history teacher, fashion blogger, writer and mentor from the Uptown section of Philadelphia.

One Response to ‘Gaga, There’s More to The Burqa Than A Stage Prop’