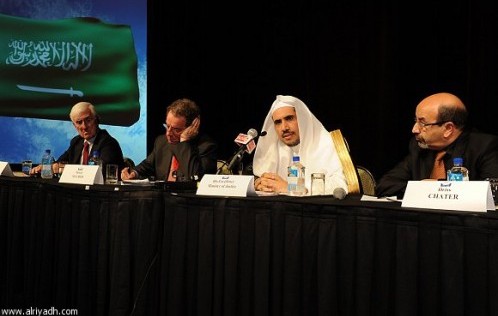 The ministry of justice was provoked this week by an outspoken piece by Dr. Badriya Al Bishr to issue a statement to the same newspaper where Al Bishr’s piece was published. Al Bishr criticized the white washing of the Saudi justice system that took place at the International Association of Lawyers 55th Congress in Miami. There, the minister of Justice, prof. Mohammed Al Eissa gave a talk on the justice system in Saudi Arabia. According to local papers his talk mostly constituted a presentation on how wonderful and just the Saudi justice system.

The papers reported that among other things he stated that the Saudi justice system does not discriminate between men and women when it comes to rights and obligations. The audacity of making such a statement at an international conference by no less than the minister of justice himself seriously makes me wonder if this whole thing is all my head. Did I imagine that a few weeks ago a Saudi woman was sentenced to ten lashes for driving her own car and that only a pardon from the king spared her the punishment? Is Najla Hariri’s upcoming trial for driving her car a figment of my imagination? How about that the ministry of justice refuses to issue licenses to women to practice law and won’t even recognize the title of lawyer for women who have obtained licenses abroad, did that change overnight?

AlBishr is apparently having the same delusions as I am, since she pointed out how sexist the ministry is when it comes to sentencing in homicide cases. If women are charged with murdering their spouse, it’s an automatic death sentence while men who murder their wives are dealt with much more leniently. AlBishr cites the recent case of a man who ran over his wife because she would not give him her salary. The murder was committed in daylight, in front of the woman’s family home and in front of several witnesses and yet the man was only sentenced to 12 years in prison. Another case that I recall is one where a man decapitated his wife in front of their toddler and was originally sentenced to only five years in prison then revised to 15.

AlBishr also notes the irony in that the minister’s talk coincided with news that a teacher at an elementary school has reached out to activists concerning the weddings of two of her students during Hajj break. The third and fourth grade girls were scheduled to be married off to adult men at the same time that the minister was giving his talk in Miami. To say that there is no gender discrimination in the Saudi justice system is an outright denial of the truth. However the ministry in issuing its statement today has shown that it is persistent in this denial even at the national level.

According to an interview with AlRiyadh Newspaper on Jan/22/2010, a sociologist, Dr. Al Johara Mohammed, states that “among us there are more than 3000 Saudi girls aged no more than 13 years married to men in the age of their parents or grandparents”. Are 3000 cases of pedophilia not a signficant enough number for our ministry? How about that an anonymous source within the ministry itself informed AlWatan Newspaper on Oct/15/2010 that in the Eastern region alone, during the previous year, 40 cases of child marriages were stopped via verbal unofficial instructions. The number of child marriages that were approved however was not mentioned in that article, only an interview with a girl who was a victim of child marriages.

AlTayyer went on to state that regardless of the ministry’s position on child marriages, it is not within its governmental jurisdiction to issue a law consigning a minimum age for marriage. If it’s not the ministry of justice’s jurisdiction, than whose is it? The Shura council when they were discussing the implementation of a child protection system, refused to officially recognize child marriages as a form of child abuse. Their reasoning was a bla bla bla argument on the semantics of child and minor.

The remarkable thing is that there is a widespread consensus among Saudis that child marriages should be banned. Members of the royal family, religious scholars, high ranking government officials and celebrities have all spoken out against it. Yet you can tell from AlTayyer’s statement that simply issuing a law that sets a minimum age for marriage is not going to happen in the forseeable future.

Maybe this is due to the hold that fundamentalists have on the Saudi government. A member of the highest religious council, sheikh AlFowzan, wrote in Okaz newspaper last July that child marriages should not be banned and warns that if we do ban them God will punish us by inflicting us with wars and plagues. A sentiment echoed yesterday by a Saudi woman columnist, Fatima Al Faqih. Besides the usual disputed argument that the Prophet (PBUH) married one of his wives when she was only six and consummated it when she was nine, she reasons that since girls for centuries were able to physically survive child marriages then the scientific argument against child marriages is de facto disproven.

Regarding those who claim that we should not abolish child marriages because the prophet (pbuh) consummated his marriage with Aisha when she was nine, this has been repeatedly proven inconsistent with historian records. This is discussed here in Arabic and you can read more about it in English. Besides the historical inconsistency, it’s also inconsistent with the prophet’s behavior since all his other wives were not only adult women but also divorcees and widows. And if we were to go with the fundamentalist argument that we should not ban anything that isn’t banned by the Qur’an than slavery should be legalized and sexual intercourse between a master and his female slaves as well. Both should be considered completely legal if we were to solely go upon the text of the Qur’an. Yet the government has abolished slavery and intercourse is only legal within the confines of marriage. So why can’t we abolish child marriages in the same way?

On a final note, in the local papers on the minister’s talk at the Miami conference, it is reported that the President of the International Association of Lawyers, Pascal Maurer, was impressed by the Saudi judicial system and hoped that the law system would be made accessible to the international community so that they could benefit.

I could not find any report of Prof. AlEissa’s talk in American or international press.