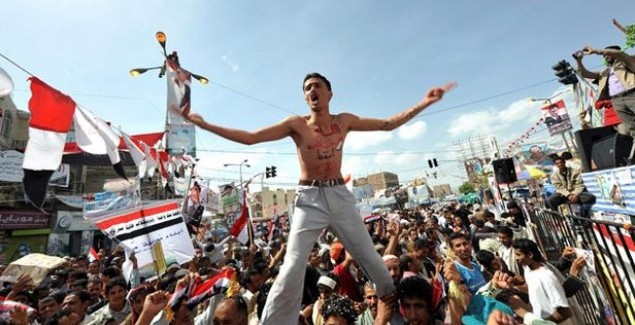 The age of revolutionary romance is over. Various Arab countries are now facing hard truths. Millions of Arabs merely want to live with a semblance of dignity, free from tyranny and continuous anxiety over the future. This unromantic reality also includes outside ‘players’, whose presence is of no positive value to genuine revolutionary movements, whether in Egypt, Syria, or anywhere else.

Shortly after longtime President Zine El Abidine Ben Ali was ousted in the Tunisian revolution in January 2011, some of us warned that the initial euphoria could eventually give way to unhelpful simplification. Suddenly, all Arabs looked the same, sounded the same and were expected to duplicate each other’s collective action.

An Al Jazeera news anchor might interrogate his guests on why some Arab nations are rising while others are still asleep. The question of why Algeria hasn’t revolted has occupied much international media. “No Arab Spring for Algerians Going to the Polls,” was the title of a US National Public Radio (NPR) program by Andrea Crossan on May 10. The very recent Algerian elections were mostly juxtaposed with much more distant and sporadic realities in other countries, rather than in the context of Algeria’s own unique and urgent situation.

Why should Algeria be discussed within the context of Yemen, for example? What kind of conclusions are we seeking exactly? Is it that some Arabs are brave, while others are cowardly? Do people revolt by remote control, on the behest of an inquisitive news anchor? Algeria is known as the country of a million martyrs for its incredible sacrifices in the quest for liberation between 1954-62. Some sort of consensus is being reached that Algerians are still traumatized by the decade-long civil war which started in 1992. The butchery of thousands was openly supported by Western powers who had feared the emergence of an Islamic state close to their shores.

While Palestinians have been traumatized severely in the 64 years that followed their expulsion from Palestine, they remain in a constant revolutionary influx. The current trauma that millions of Syrians are experiencing as a result of the violence also cannot be expressed by mere numbers. Yet the violence is likely to escalate to a civil war, as destructive as that of Lebanon’s, if a political solution is not formulated under the auspices of a third, trusted party.

It is easy to fall victim to conventional wisdoms, to disseminate odd theories about Arabs and their regimes. The problem is that every day is churning out new events which cannot fit into a simplified concept like the ‘Arab Spring’. The poeticism of the term was hardly helpful when 74 people died and hundreds more were injured as fans of two Egyptian soccer clubs clashed in Port Said on February 1st. The disturbing news seemed inconsistent with the Tahrir Square rallies one year prior. Some in the media dismissed the killings as ‘confusing’ or just ‘unfortunate.’ It simply didn’t fit the almost scripted perception we wished to have of Egypt’s ‘perfect’ revolution. But Egyptians understood well the roots of the violence, and explained it within a local context. The fact is, the occasional violence that followed the ousting of President Hosni Mubarak was uniquely Egyptian and perfectly rational within the many movements that were attempting to exploit the revolution.

If things go according to plan, Egypt might have its first democratically-elected president in July. While some will celebrate the official rise of a ‘new Egypt’, others will mourn the demise of the revolution and its prospected achievements. But there can be no perfect revolution with positive outcomes unanimously agreed on by all sectors of society. This doesn’t mean that the Egyptian revolution has failed. It has succeeded in engaging many new participants in the country’s political life, which had been controlled for so long by an authoritarian government. Tahrir Square has revised the rules of the game – partially for now, but maybe fundamentally in the future.

Jean-Paul Sartre believed that society needed to position itself in a permanent state of revolution in order for freedom to take root and flourish. His support of the French youth revolt in 1968 was a testimony to his strong belief in freedom as a collective quest. “What’s important is that the action took place, when everybody believed it to be unthinkable. If it took place this time, it can happen again,” he wrote in 1968.

“It is not uncommon…that the revolution by the masses turns upon itself and starts feeding upon its own to protect itself against a conceived counter-revolution or internal dissension,” wrote Ayman El-Amir in Egypt’s Al Ahram Weekly. He further claimed that the “Arab Spring has gone berserk, devouring its friends and foes alike, not so much because of fear of the counter-revolution but because one faction wants to steer the nation in its own direction. As a consequence, an environment of chaos is deliberately incited and revolutionary change is disrupted or misdirected.”

There is much truth to that, but El Amir too is falling into the pit of generalization. Syria is not Egypt, and a Tunisian may not think that her country’s revolution is ‘devouring its friends and foes.’ The Arab Spring is only confusing and strange when we insist on calling it an ‘Arab Spring.’ It is much more cogent when understood within its local contexts. Egypt is in turmoil simply because it is undergoing a process that is restructuring a society that was made to cater to the whims of a small, corrupt class of rulers. Syria is positioned in a much more difficult geopolitical intersection, where countries throughout the region are all ‘investing’ in the violence to ensure that the outcome suits their interests. The Syrian people’s relevance to the struggle there remains strong, but, unlike Egypt, they are not the dominant party anymore.

Egypt is not Syria, and Yemen is not Bahrain. However, while we need to remain wary of generalized and reductionist discourses, this does not indicate a need to disown collective identification with other people’s struggles. To the contrary, a truer understanding of what is now taking place in various Arab, and also non-Arab countries, is a more conducive way of offering solidarity. “We will freedom for freedom’s sake, and in and through particular circumstances. And in thus willing freedom we discover that it depends entirely upon the freedom of others and that the freedom of others depends upon our own,” Sartre argued. It is from this value as a point of departure that one can speak of Yemen, Syria, Egypt, and yes, Greece in the same sentence. Any other interpretation is lacking at best, suspect at worst