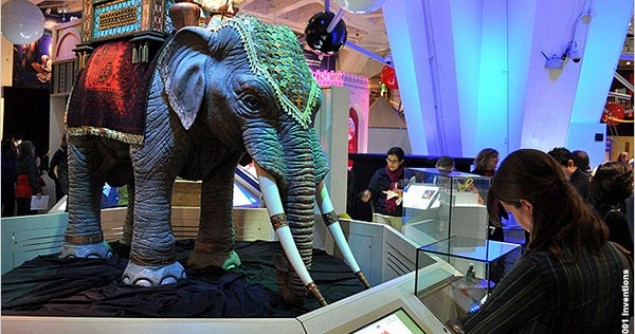 In his best-selling novel, The Museum of Innocence, Turkish author and 2006 Nobel Prize winner Orhan Pamuk speaks eloquently of the importance of museums to society.

“With my museum I want to teach not just the Turkish people but all the people of the world to take pride in the lives they live,” Pamuk writes. “I’ve travelled all over, and I’ve seen it with my own eyes: while the West takes pride in itself, most of the rest of the world lives in shame. But if the objects that bring us shame are displayed in a museum, they are immediately transformed into possessions in which to take pride.”

The power of museums lies in their ability to shed light on accomplishments that may not have been captured in the histories of Western civilization. In Washington, DC, two very different museums are doing this with exhibitions that focus on the forgotten impact of Islam.

A National Geographic Society exhibition reveals that the Dark Ages were not quite as dark as history books would have us believe. “1001 Inventions: The Golden Age of Muslim Society,” which runs through mid-February, shows the era between the end of the Roman Empire and the Renaissance was filled with innovation and illumination in every field – medicine, mathematics, cartography, science, astronomy, agriculture, architecture and more. So why is this missing from our history books? How can these contributions have been overlooked?

One reason is that this chapter in our shared human story was written in another language – Arabic.

“A thousand years’ amnesia still exists. It needs sorting out,” said Salim T.S. Al-Hassani, chief editor of the exhibition’s companion book and the driving force behind the project, during a 14 September talk at the National Geographic Society. “By bringing role models from history, we can influence and inspire young people today.”

These role models include Jabir Ibn Hayyan, “the father of chemistry”, Abbas Ibn Firnas, an early pioneer of unpowered flight, Al-Farabi, who invented an ancestor to the violin, and Abu Marwan Ibn Zuhr (Avenzoar), a pioneer of experimental surgery whose two daughters also became doctors.

Thanks in large part to Al-Hassani’s efforts, people around the world are finding renewed inspiration and pride in their heritage. Before opening in Washington, the exhibit drew more than 2 million visitors in New York, London, Los Angeles, Istanbul and Abu Dhabi and attracted record attendance – more than 72,000 – during a recent four-week run in Doha.

While the National Geographic Society is a well-established museum in Washington’s tourist-friendly downtown area, across the river in the city’s Anacostia neighbourhood, a newer, smaller museum also illuminates some missing history – the contributions of Muslims to American societyAmerica’s Islamic Heritage Museum, which opened its doors in April 2011, tells the story of US Muslims who have been a part of this country since its inception – often hiding in plain sight.

Displays include copies of early US Census records with multiple transliterations of the name Muhammad, photographs of tombstones engraved with a raised index finger, indicating a Muslim burial (this being a sign for one God), and early writings in Arabic by Africans brought to this country as slaves.

“People thought they were illiterate,” said museum founder and president Amir Muhammad, pointing to a page of Arabic script written by a slave during a recent tour. “They just spoke another language.”

While it highlights the contributions of some influential Muslim Americans, such as Nation of Islam leader Malcolm X and boxer Muhammad Ali, the museum is most effective in its efforts to chart the establishment of mosques and Islamic institutions in the United States – among them the Red Crescent (1920), the Muslim Student Association (1963), and the Islamic Society of North America (1982) – and restore the missing identity of Muslim slaves, thereby freeing them from shame.

Visitors to Muhammad’s museum are often surprised to learn of Islam’s deep roots in America and many describe the exhibits as eye-opening. But for Muslims who visit these exhibits and others like them, the experience can be a source of pride.

Toward the end of Ramadan, Dr. Mussaret Anwar Sheikh, chair of the Department of Education at Fatima Jinnah Womens’ University in Rawalpindi, Pakistan, travelled with her grandson to visit family in Washington. When asked how she had passed her time, she offered the usual list of attractions.

Then her face brightened.

“Have you seen this exhibit at the National Geographic Society?” she asked. “My grandson was amazed. He said, I’m a Muslim, and I never knew this before! It’s the best thing I’ve seen in Washington.”

Lucy Chumbley is a freelance journalist based in Washington, DC.